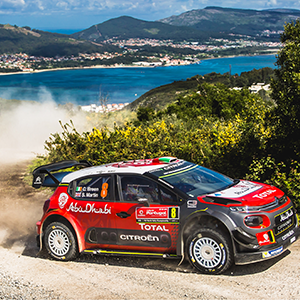 Craig Breen and Scott Martin finished Rally de Portugal fifth overall, the Citroën Total Abu Dhabi WRT’s highest-placed crew. All four of the team’s Citroën C3 WRCs made it to the end of the season’s sixth round.

The Citroën Total Abu Dhabi World Rally Team crews went into the final day of Rally de Portugal with different goals. Craig Breen/Scott Martin were looking to hold onto their place in the top five – which they succeeded in doing, finishing fifth overall.

Meanwhile, Stéphane Lefebvre/Gabin Moreau, Khalid Al Qassimi/Chris Patterson and Kris Meeke/Paul Nagle were using the last leg and remaining kilometres to increase their experience and gather data, as it had been an eventful rally for the team.

On the Friday, Khalid Al Qassimi received a one-minute penalty for leaving service late because of an oil leak and Stéphane Lefebvre rolled the car after a pace note misunderstanding coming into a fast corner. He managed to make it to the end of the stage and the next service, but had fallen several minutes behind his teammates. Kris Meeke was leading the rally at the end of SS5, but suffered a slow puncture on the next stage, and on SS7 the Briton damaged part of the suspension following an impact.

During the Sunday morning, having rejoined under Rally2 rules on Saturday, Kris Meeke was the quickest of the Citroën drivers, setting the second fastest time on Montim (SS18).

Fourth on the road, Stéphane Lefebvre had to cope with sweeping the loose gravel off the surface. Constantly looking for grip, the young Frenchman focused on keeping his car on the road.

Equally hampered by his starting position on the last day, Khalid Al Qassimi caused a real stir on the Power Stage. The Abu Dhabi driver produced the most spectacular jump, only just managing to pull his C3 WRC out of the ditch to make it to the finishing line.

After the final stage (Fafe), Craig Breen and Scott Martin claimed yet another fifth place overall, just as they did in Monte-Carlo, Sweden and at the Tour de Corse. The Anglo-Irish crew lie seventh in the Drivers’ World Championship.

Yves Matton, Citroën Team Principal: “With the fifth place of Craig and Scott, who were contesting this rally properly for the first time, we have secured a decent result. We can also be pleased with our level of performance on the opening day, when we had two crews challenging for the lead. We are now going to turn our attention to the next event.”

Craig Breen: “It looks like I’ve signed up for fifth place for the season. It’s been another good weekend for us. We were one of the fastest on Friday and in all likelihood, we would have led the overall standings had we not hit a rock and broken a damper on SS7. We had a little bit more difficulty matching the pace of the leading cars on the next two days. I think there were several factors at play, but it was mainly down to my lack of knowledge of the stages and not having such a good starting position. We’ll keep working and try to do even better in Sardinia.”

Stéphane Lefebvre: “The result obviously falls way short of what we were looking for when we came here. We had worked particularly hard to prepare for this rally, but our race changed shape dramatically on Friday morning. After our roll, we tried to improve as we completed more stages. Our starting position certainly didn’t help us to show what we can do.”

Kris Meeke: “We ended the rally today having got back to a rhythm closer to that of the leading crews. It seems that our level of performance wasn’t as good after the first leg, and we’ll need to work out why. We must all keep working and, on my side of things, I have to cut out these minor mistakes.”

Khalid Al Qassimi: “We had quite a scare on the second run over the Fafe jump. I wanted to go faster than on the first pass, but it was clearly a bit too much. In any case, I’m pleased to make it to the end of my first rally in the Citroën C3 WRC. I need to get more kilometres under my belt to come to terms with its potential.”