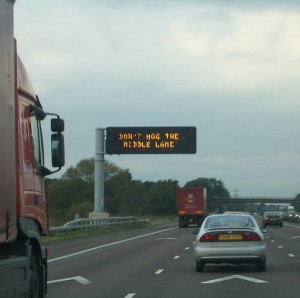 Tailgaters, mobile-phone users and lane-hoggers are set to face on-the-spot fixed penalty notices, under a government crackdown on careless drivers.

The changes, set to take effect in July, will punish motorists who put other drivers at risk, while helping free police officers from resource-intensive court processes.

Meanwhile, fixed penalty levels for most motoring offences – including using a mobile phone at the wheel and not wearing a seatbelt – will rise to £100.

This brings it in line with the penalties for similar non-motoring fixed penalties.

“That is why we are making it easier for the police to tackle problem drivers by allowing them to immediately issue a fixed penalty notice rather than needing to take every offender to court.

“We are also increasing penalties for a range of driving offences to a level which reflects their seriousness and which will ensure that they are consistent with other similar penalty offences.”

The fixed careless driver penalty – £100 with three points – will see officers offer educational training as an alternative to endorsement.

Any decision can still be appealed, while serious offenders may face higher penalties as they can be summoned to court.

The changes, introduced following extensive public consultation with road safety groups and police forces, will not apply to parking offences.

Edmund King, President of the AA, said AA members broadly support an increase in the level of fixed penalty.

“We are pleased to see that at long last new powers and fines will be given to the police to tackle the top three pet hates of drivers – tailgaters, mobile phone abusers and middle lane hogs,” he said.

“It is worrying that three-quarters of drivers see others using mobile phones behind the wheel on some or most journeys.

“This epidemic of hand held mobile phone use while driving has already cost lives and our members have demanded action.

“An increase in the standard motoring fixed penalty fine will help deter those who commit motoring offences including mobile phone use.”

Chief Constable Suzette Davenport, ACPO lead on roads policing, added the measures should act as a reminder to careless drivers that their behaviour will not be tolerated.

“The new penalties are absolutely necessary to deal with drivers who are putting people’s lives at risk and police will not hesitate to enforce them,” she said.

“The vast majority of drivers are law abiding, but some are still not getting the message.

“We said we would get tougher on those who make our roads dangerous and that is exactly what we have done.”

Image courtesy of Judin, with thanks.