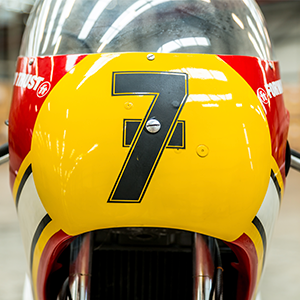 Suzuki has released the second video following the restoration of Barry Sheene’s 1976 world championship-winning XR14, which documents the journey through to the moment the iconic machine was started for the first time.

Restored by former Grand Prix technicians Martyn Ogborne – who was Barry Sheene’s mechanic during his championship-winning seasons – and Nigel Everett, the factory version of the RG500 that dominated Grand Prix racing carried Sheene to four victories during the 1976 season.

The bike was flown to the UK last year, as part of the 40th anniversary celebrations of Sheene’s maiden world title. Following its restoration, which was made possible by Suzuki’s Vintage Parts Programme and the Sheene family – to whom the machine still belongs – the bike will now appear at a number of events this year, including the Sheene Festival at Oliver’s Mount, the Donington Park Classic Motorcycle Show, and the British Grand Prix in August.