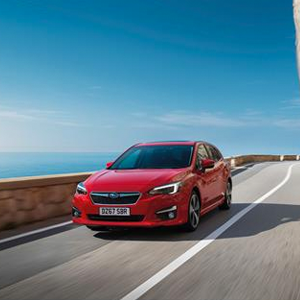 New from the ground up, Subaru’s All-New Impreza hatch is making its European Debut at the Frankfurt International Motor Show. Safety performance has been at the forefront of development with Subaru’s new Global Platform and EyeSight, Subaru’s driver assistance system, fitted as standard in the UK.

Impreza is a compact hatchback and follows Subaru’s unique formula of Symmetrical All-Wheel Drive paired to a Boxer engine. This is the fifth generation of the Impreza model, and the hatchback has found a place in the market for people who need go anywhere capability and the reassurance of permanent All-Wheel Drive, but don’t want an SUV sized vehicle.

Subaru’s design philosophy for Impreza is DYNAMIC x SOLID – a dynamic urban influenced design contrasted against a fit-for-purpose aesthetic, form backing function in a well-designed package with nothing extra added.

The design philosophy has been diffused into a Sporty & Advanced package. The design is a tougher, more dynamic iteration of Impreza with the Subaru hexagonal grille and hawk-eye headlight family face. Built on the proportions of outgoing Impreza, but with sharper lines focused towards the rear of the vehicle.

Functional elements are also included to ensure Impreza is fit for purpose, such as a raked back windscreen and lower roofline at the rear to increase aerodynamic performance.

Impreza will be available in a choice of five colours: –

The All-New Impreza’s interior has been designed to make sure the driver is free to focus on the road ahead and enjoy driving the car.

The Interior design philosophy has been translated into a Bold & Refined theme. The dash profile is heavily sculptured and is a continuous piece, whilst the seats have been designed to feel substantial and make the driver feel secure.

The quality of soft touch plastics and finishes have been improved across the interior, without losing the functionality and hard-wearing features that Subaru customers love. The all-new Impreza is fitted with an 8-inch touchscreen is fitted, and the system is equipped with Apple CarPlay™, Android Auto™ integration and DAB radio.

A new combination meter is also included, which provides additional detail to the driver, such as the status of EyeSight. A Multi-Function Display sits on top of the dash and this provides at-a-glance information on key vehicle systems.

All-New Impreza has been re-packaged for improved interior comfort and versatility. The car is 10mm lower, 35mm wider and has a 25mm longer wheelbase.

The cabin is wider by 29mm at the front and 34mm at the rear and has 26mm more rear seat leg room. Maximum luggage capacity has also increased by 10 litres by having a 100mm wider boot opening and the depth of the boot is also longer by 41mm.

The Subaru Global Platform (SGP) was developed as part of the “six initiatives to enhance the Subaru brand” proposal included in the mid-term management plan, Prominence 2020, which was announced in 2014.

The platform is the fundamental technology for all next-generation Subaru models going forwards in conjunction with Boxer engines, Symmetrical All-Wheel Drive and EyeSight. Impreza is the second model to be launched on the new platform, following XV’s debut at Geneva earlier in the year.

One of the core benefits of the SGP is improved driving capability and dynamic feel.

For a dynamic driving feel, straight line stability and handling needs to be high, noise and vibration needs to be low and the ride comfort needs to be compliant yet firm.

These rigidity improvements mean a more dynamic response from the chassis; with the vehicle reacting quickly when the driver steers the vehicle allowing the driver to react quickly to hazards and position the vehicle effectively.

The chassis frame work is also smoother which adds to the torsional rigidity of the platform.

A key development goal for SGP was to reduce floor and steering vibration.

The chassis design effectively disperses chassis and seat resonance which cuts back on vibrations from the steering, floor and seats.

This result has been achieved by adopting adhesive for structures across the platform which suppresses deformation of flanges and sections of the chassis.

The ride quality has been designed to be firm, but comfortable.

Suspension mount rigidity has been increased which ensures the damper moves as intended by ensuring the mounting point has minimal flex and is holding the damper securely in place. The rear stabilisers are also mounted directly to the chassis which reduces body vibration.

SGP has potential to maintain the highest standard of collision safety through to 2025, as its structure has been designed to incorporate a high strength design and more durable materials.

A by-product of the various improvements to the chassis is significantly enhanced emergency handling; the vehicle responds quickly, even at a higher speed.

Collision energy absorption has been increased by 40% by using a frame structure designed to absorb energy more effectively during a collision by having three conduction routes versus two conduction routes with a smooth outer leg versus the previously used dog-leg design.

The use of high strength steel has been expanded with more high-tensile steel panels and hot press moulded sections.

Safety is a key focus of the all-new Impreza, with a suite of advanced driver assist systems in addition to traditional safety equipment.

EyeSight is Subaru’s advanced driver assist technology, which acts as a second pair of eyes for the driver.

EyeSight was developed with three objectives in mind; safety, lowering carbon emissions by reducing incident congestion and economic effects of this by reducing time sat in traffic as a result.

2008 – EyeSight introduced to Japanese market with stereo camera only.

2017 – EyeSight is being introduced into all Subaru markets globally.

In the UK, Outback was the first model to be fitted with EyeSight followed by Levorg in early 2017. Going forwards, EyeSight will be introduced across the range.

The institute for Traffic Accident Research and Data Analysis in Japan produced a study of Subaru vehicles involved in accidents 2010-2014 and found that there were 61% fewer accidents involving EyeSight equipped cars versus cars without EyeSight.

Globally, the milestone of 1 million EyeSight-equipped vehicles on the road was hit in 2016.

EyeSight uses two stereo cameras to capture three-dimensional colour images with excellent image recognition, and is nearly as capable as the human eye. EyeSight can recognise vehicles, motorbikes, bicycles, pedestrians, lane markings and road furniture and can differentiate between these and determine the general traffic conditions.

With an emphasis on real-world tests and evaluations, EyeSight has been developed to correspond exclusively to the individual country’s traffic conditions.

One camera is mounted each side of the rear-view mirror to monitor the road and traffic ahead for potential hazards up to 110 metres up the road. EyeSight takes an image from each camera and compares these images to determine the distance of this object. The larger the displacement of each image, the closer the object is.

Depending on the vehicle’s speed, accidents can be completely avoided and the severity significantly reduced at higher speeds.

Subaru Rear Vehicle Detection System (SRVD)
SRVD helps the driver to change lanes on the motorway safely or detect hard to see hazards when completing low speed manoeuvres. SRVD is a radar-based system, with radars fitted beneath the Impreza’s tail lamps and covered by the rear bumper, detecting vehicles to either side of the car.

SRVD is a package of three technologies, designed to alert the driver to potential hazards behind the vehicle:

Boxer engines are integral to what makes a Subaru a Subaru, the engine takes its name from the punch-counterpunch motion of the horizontal pistons within a lightweight, aluminium-alloy engine block.

Using a Boxer engine means that the engine can be positioned in line with the drivetrain for maximum transfer of power. Many other engines are transverse or perpendicular, which can require additional drivetrain components to transfer power, which results in reduced vehicle efficiency when compared to a Boxer engine.

The punch-counterpunch movements of the pistons balance each other out, which means the engine is smoother with reduced vibrations and noise. Additionally, the unit provides a lower centre of gravity and in turn, exquisite handling and poise plus greatly reduced roll when cornering.

At launch in the UK, a 1.6 litre engine will be available with a 2.0 litre joining the range after launch.

The 1.6 engine is from the FB series, and is port injected. 70% of the components in the engine have been redesigned.

The compression ratio has been increased from 10.5:1 to 11.0:1, the overall engine weight has been reduced by 14kgs, with the following specific weight savings;

The series of revisions have ensured that vibration and noise are significantly reduced, and acceleration response has been improved for a more linear feel, making the 1.6 feel more refined all-around.

The 2.0 is also from the FB series of engines, and is direct injected. 80% of the engine has been redesigned, including a 12kg weight reduction.

The compression ratio has been increased from 10.5:1 to 12.5:1, and a new tumble generation valve and port internal baffle has been fitted to the intake which revises air flow in the intake, increasing airflow into the cylinder in order achieve a better mixture and improved fuel efficiency. Another result of development has led to the highest brake thermal efficiency in its class.

The rigidity of the engine block has been increased, and additional mounting points help to minimise vibrations and reduce noise across various engine operating ranges. In addition, this adds to a more consistent feel between acceleration performance and the engine noise.

Lineartronic is the first Continuously Variable Transmission (CVT) adopted for AWD use. Lineartronic has been designed specifically for use with Boxer engines and Symmetrical All-Wheel Drive to optimise fuel consumption via a stepless gear ratio and optimal power band. Lineartronic also has a damper to reduce torque fluctuations, removing the “surge” traditionally associated with CVT gearboxes.

For Impreza, the ratio coverage has been widened and the weight of the transmission has been reduced by 7.8kgs versus the outgoing car. This increases acceleration performance and fuel efficiency.