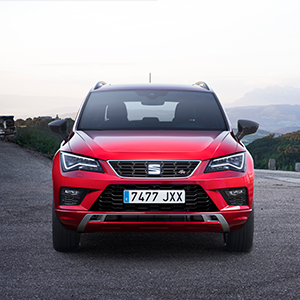 Barcelona-based SEAT is preparing to showcase two new cars at its home city international motor show, which runs from 11th to 21st May 2017.

The automobile world, connectivity, digitalisation, technology and smart mobility will go hand in hand at Automobile Barcelona, combining two shows into one. Firstly, Connected Hub, an event dedicated to in-car technology will bring tech, mobility and new business models together. And secondly, the motor show, itself.

This is the ideal stage for SEAT to demonstrate its decision to reinforce its position as front-runner in connected car, in-car technology and in the development of new mobility solutions where the connected car enhances the driver experience, making it easier and more flexible.

At Automobile Barcelona, SEAT will demonstrate how it is responding to the challenges of the immediate future in terms of connectivity solutions, digitalisation, smart technology, urban infrastructures and traffic systems.

The protagonist on the SEAT stand will be the Ateca FR, which will make its international debut at Automobile Barcelona 2017. The latest addition to the high-selling SUV range provides sportiness without ever compromising SEAT’s connectivity, luxury, comfort and style.

The Ateca FR is immediately identifiable on the outside through its aluminium roof rails and window frames, unique glossy black grille, FR bumpers and rear fog lights, 18-inch alloy wheels (19-inch option available) matching colours to the bodywork for the wheel rims and side skirts (with aluminium moulding that runs along both doors), the rear window framed by black lateral spoilers and matching bodywork colour for the spoiler on the boot and the FR logo at the front and rear.

The logo is repeated inside on the aluminium kick plates and multi-function sports steering wheel in leather with glossy black insertions. The sports seats are upholstered in Alcantara®, the door panels have an exclusive FR covering, the pedals are aluminium and the red stitching on the steering wheel, the gearbox and seats emphasises the sporty side of the car which also comes with firmer suspension to add to the driver experience.

This will not be the latest part of SEAT’s SUV story. Later this year, the Arona will arrive, followed in 2018 by a large SUV with a choice of five- or seven-seats.

The Ateca FR, All-new Ibiza and Leon CUPRA 300 will be accompanied on the SEAT stand by the Concept Car SEAT 600 BMS, a SEAT design exercise; a project to commemorate the 60th anniversary of one of the brand’s most iconic models.

A tribute to the past, the 600 BMS is based on the unforgettable SEAT 600D with its rectractable top. Much like the first generation of its forerunner, the 600 BMS Concept Car is equipped with front suicide doors and maintains the rectractable canvas top.

With its attractive vintage styling, it features striking light grey “metallic twist” body paint with adhesive decals in orange and an evolved “600” logo that is much more graphic. The car retains its original wheels and brakes. On the inside, the 600 BMS has exclusive leather upholstery with orange stitching and side detailing also in leather.

Taking advantage of the partnership between SEAT and Ducati for the 2017 MotoGP World Championship, where the Leon CUPRA 300 will be the official car of the Ducati Team in Moto GP, the Ducati Corse Show bike will also appear on the SEAT stand.

The SEAT stand at Automobile Barcelona 2017 will include two zones that are divided by the city’s iconically famous “diagonal” boulevard. The Leon CUPRA and the Ducati Corse showbike, as well as the new Ateca FR, will be displayed in the first zone, which will also feature a 4D virtual experience. The second zone will highlight the fifth generation of the new SEAT Ibiza. The SEAT 600 Concept Car will be on display in the middle of the stand, together with the SEAT simulator.

Luca de Meo, President of SEAT, will be delivering a keynote speech at Automobile Barcelona 2017, discussing topics such as digitalisation of cars and the auto industry, connectivity and the company’s commitment to Barcelona and this motorshow event. In addition, the international press will receive insights into all of the brand’s new developments. He is scheduled to speak at 10:00 am on 11th of May.

2017 represents a special year for SEAT. After obtaining the best financial results in its history in 2016, with operating profits of 143 million euros and 232 million euros after tax, SEAT has started the year at a good pace, as one of the fastest-growing car brands in Europe, with a sales increase of 14% in the first quarter compared to the same period in 2016.