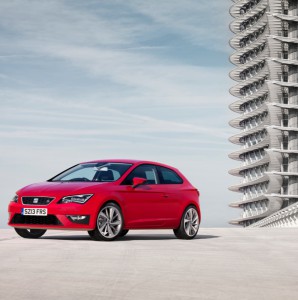 Seat Leon SC will make its UK debut at the London Motorexpo next week.

The new three-door sports coupe will be Seat’s first attendee at the annual event, which opens Monday, June 10, at Canary Wharf.

Visitors to the free-to-attend festival will be able to closely view the £15,370 three-door car, which is currently on sale ahead of its July showroom release.

Enthusiasts will also be able to get behind the wheel of the five-door Seat Leon, with both petrol and diesel models available to try.

Seat say the Leon SC combines ‘the road presence of a coupe with the practicality of a family hatchback’.

It has a shorter wheelbase, lower roofline and broader shoulders than its namesake, with the same 380-litre boot as the five-door Leon.

It was unveiled at the Geneva Motor Show in March.