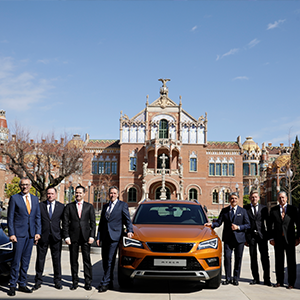 SEAT’s profit after tax grew to 903 million euros due to the extraordinary effect of selling the subsidiary VW Finance, S.A. to Volkswagen AG. This operation, which falls within the framework of the Volkswagen Group’s strategy to reorganise its financial subsidiaries under a single company, yielded SEAT a capital gain of 671 million euros. The sale enables the brand to improve its financial position after allocating 590 million euros to compensate losses from previous years.

“Higher levels of sales, higher mix and cost optimisation lead us to profitability. We as a team are very proud of our 143 million euros operating profit”, underlined SEAT Chairman Luca de Meo today in Barcelona during the presentation of the financial results for 2016.“SEAT has become a solid company that moved clearly from recovery to a consolidation phase. And SEAT is now preparing itself for development and growth”, explained Luca de Meo. Furthermore, he added that “2017 is a very special year for SEAT. The Ibiza and the Arona will speed up this process. We are ready to move SEAT to the next level”.

SEAT’s 2016 turnover stood at 8,597 million euros, 3.2% higher than the previous year, and again the best revenue figure in its history. The driving forces behind this figure are growing sales and a better vehicle mix, as demonstrated by the commercial success of the Ateca, the Leon and the Alhambra, three models with a higher contribution margin. Another positive contribution was made by the integration of the SEAT Technical Centre (CTS) into the parent company, an operation that enables a more efficient response to the technological challenges of the future, as well as the increased business obtained by SEAT Componentes, which in 2019 will manufacture the Volkswagen Group’s new MQ281 gearbox. In 2016, SEAT exported 82.4% of its production and established itself as Spain’s leading industrial exporting company, with 2.8% of the country’s total figure.

The biggest product offensive in the history of SEAT, with four new models from 2016 to 2017, resulted in a record figure for total investments and expenses in R&D. SEAT allocated 47% more to these line items to reach 862 million euros, 276 million more than in 2015, in order to address, among other priorities, the new MQB A0 platform, which SEAT will be the first in the Volkswagen Group to use for the production of the fifth generation Ibiza. This figure represents 10% of the company’s turnover. Since 2012, SEAT has invested 3 billion euros in R&D, equipment and facilities.

In 2016, SEAT also increased its capacity to generate profits through its core activity. The company improved its EBITDA (earnings before interest, tax, depreciation and amortisation) by 25% to reach 489 million euros.

SEAT Vice-President for Finance, IT and Organisation Holger Kintscher underscored that “the 2016 results mark a turning point and reflect the effort put in in recent years. We are back in the black, for both the operating result and profit after tax. EBIDTA and our level of investment demonstrate the company’s strength from a financial point of view. We are where we are as a result of everyone’s effort”.

As defined in the collective agreement signed in 2016, SEAT employees will receive a total of 6 million euros as a benefit for the achieved results. This figure is included under the personnel costs heading.

This year SEAT will complete the biggest product offensive in its history with the sale of the fifth generation Ibiza, which is going to reach dealers starting this summer, and the launch of the Arona, the brand’s new compact crossover, in the second half of 2017. Both models, produced in the Martorell factory, will join the Ateca, which was launched in 2016, and the Leon facelift, which has been on sale since last January.

The expansion and renewal of the range will enable SEAT to increase its market coverage from 53% to 72% in Europe and give fresh impetus to sales, as well as lower the average age of the SEAT model line-up. In January and February of this year, SEAT’s worldwide deliveries saw a double-digit increase (+13.6%) to stand at a total of 64,000 vehicles. In addition, the brand is one of the fastest growing in Europe at the beginning of the year, with an increase of 20% in vehicle registrations.

Regarding the expansion of the brand, SEAT Chairman Luca de Meo indicated that “we are working on internationalisation projects. A good and concrete example is the decision to produce in Algeria starting in the second half of the year. This is a Group’s project which starts with the Ibiza and the Golf, but SEAT will take the leadership role. All the Ibiza sold in Algeria will be made in Martorell and the final assembly will take place in Algeria, in the importer’s new plant”.

One of the goals SEAT has set for itself is to become a benchmark in the industry in terms of connectivity and smart mobility. To achieve this, the company will inaugurate the Metropolis:Lab Barcelona in April, a 100% SEAT facility that will be integrated in the Volkswagen Group’s worldwide network of digital labs. The brand is also going to open a flagship store in the coming months in Barcelona to enhance its relation with customers and with the city.

(*) SEAT prepares its individual financial statements according to the Spanish General Accounting Plan, without including its subsidiaries. The Volkswagen Group applies international accounting standards (IAS/IFRS) and consolidates the SEAT brand figures.