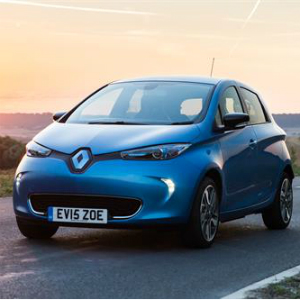 The Renault ZOE was crowned Overall Green Apple Champion for 2016 this morning at the Houses of Parliament after also being judged the winner in the Green Organisation’s Pure Electric and Hybrid Cars category for the second time.

The ZOE was voted into first place as judges from the Midland Group of Motoring Writers praised its environmental credentials, commitment to an electric future and its affordability. Marks were awarded by the judges for the way a car drives and behaves in the real world, away from the testing laboratory. Renault estimates that the ZOE, recently unveiled with an uprated battery to provide up to 250 mile range (NEDC) – the longest of any mainstream electric car, has a real-world range of between 186 miles in temperate conditions and 124 miles in extreme cold conditions.

One of the Midland Group of Motoring Writers said of the ZOE: “It is by some measure the most convincing all-electric vehicle I’ve driven. So good, in fact, than it only takes a few miles to forget what’s powering you along so convincingly.

“The ZOE shows Renault’s commitment to the future of electric power in an affordable package that looks good, drives well and does its bit to make the planet a little bit greener.”

Paul Flanagan, Groupe Renault Managing Director, said: “The Renault ZOE is stylish, affordable and practical and is perfect for those who are looking to downsize their carbon footprint. We’re delighted that the Green Organisation and Midland Group of Motoring Writers have recognised the ZOE for its environmental credentials.”

The Renault ZOE is a part of Renault’s Z.E. range made up of the Twizy and Kangoo Van Z.E. The ZOE range is priced from £13,995 (after PiCG plus battery lease) in a choice of three trim levels, including a new top-of-the-range Signature Nav trim and can be purchased either outright or by leasing the battery.

The ZOE has been selling strongly in the UK with 1,482 examples sold in the first three-quarters of 2016 – a 33 per cent increase on the same period of 2015 – continuing the trend set in Europe where Renault was the best-selling electric vehicle manufacturer in 2015.  Purchases of ZOE represents one in six electric vehicles sold in the UK.

The ZOE is proving popular with the British public having been voted Best Supermini in the Auto Express Driver Power Survey 2016 and coming second overall out of 183 models. The ZOE is also a three-time winner of What Car?’s ‘Best Electric Car for less than £20,000’.

The Green Organisation, based in Northamptonshire, was established in 1994 as an international, independent, non-profit, non-political, non-activist environment group, dedicated to recognising, rewarding and promoting environmental best practice around the world and invites entries from all parts of industry for its annual Green Apple Awards.