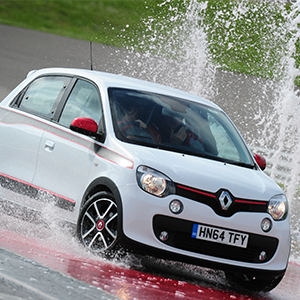 Renault is once again backing an award-winning safety scheme aimed at reducing the number of serious road accidents in the UK. Safety initiative CarKraft, based in the country’s fastest county of Northamptonshire, is helping to successfully cut the number of people killed or seriously injured in road traffic accidents.

Renault’s backing for CarKraft is now in its eighth year and joins Northamptonshire Highways, Northamptonshire Police and Adrian Flux Insurance, in lending support to the popular free programme at Rockingham Motor Speedway and the Porsche Experience Centre at Silverstone.

Tutors running the events between March and October are all highly qualified motoring professionals with years of experience in both motor racing and advance driving techniques. Each course is free of charge and offers drivers a dynamic mix of workshops, allowing them to experience driving on simulated, challenging conditions in a range of Renault cars, including Twingo, New Clio, Captur and All-New Mégane. It also explores the main causes of car crashes – failing to look/judge, excess and inappropriate speed, excess alcohol/drug driving and seat belt safety.

Drivers aged over 17 will be able to experience the effect of a loss of wheel traction to explore car control under extreme road conditions, and get an assessed drive on public carriageways with a police driver, who will give tips on advanced techniques.

The CarKraft driver improvement scheme is now in its 15th successful year and was originally aimed at young drivers aged 15 to 24 years old. It was awarded a Prince Michael International Road Safety Award in 2006 and was shortlisted for the FirstCar Young Driver Road Safety Awards 2015 ‘Young Driver Campaign of the Year’.

Since its inception, more than 8,000 people have benefited from the unique experience, which helped reduce the number of people killed or seriously injured in Northamptonshire to an all-time low in 2011. The figures continue to go down and last year saw an 18% fall in deaths on the county’s roads and an encouraging 24% reduction in young driver casualties.

In 2014, CarKraft expanded to include non-drivers between the ages of 15 and 25 and licence holders of all ages from anywhere in the UK. The schemes have been hugely popular, regularly over-subscribed and have attracted numerous best practice visits by other local authorities.

Keith Millard, a Road Safety Officer with Northamptonshire Highways, said: “We are very pleased to be able to work with Renault UK and their continued support with our award winning event has helped in a continuing fall in young driver casualty numbers in Northamptonshire in 2016. There are a few driver places left for this Saturday’s event and we would encourage anyone interested in improving their driving skills to book a place”.