Renault And The Ellen Macarthur Foundation 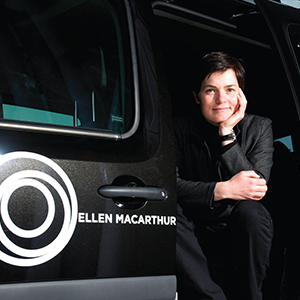 Groupe Renault and the Ellen MacArthur Foundation have deepened their ground-breaking partnership and embarked on a new series of commitments to the circular economy.

Both partners believe in the benefits of transitioning from a linear economic model to a circular economy in order to preserve natural resources and ecosystems and secure the long-term future for companies like Renault.

Jean-Philippe Hermine, Groupe Renault’s Vice President of Strategic Environmental Planning, said: “We are delighted to be renewing our partnership with the Ellen MacArthur Foundation.

We have been working together for seven years and are now exploring how to embed circular economy in our international operations. Some of Renault’s future projects include studies into extending our European remanufacturing model into other regions of the world, such as India, Brazil, Morocco and China, as well as continuing its deployment over the lifecycle of electric vehicle batteries and new mobility solutions.”

“Renault was involved right from the beginning of the Foundation’s journey – when the circular economy was just emerging as a coherent framework. Since then, Renault has put a circular economy approach into practice, demonstrating the economic rationale through many examples. I am delighted that Renault will be continuing this journey with us.”

A special partnership to promote the circular economy

Renault first joined forces with Dame Ellen MacArthur in 2007 and their partnership has provided a framework for the company’s commitment to reducing its environmental footprint across every stage of the lifecycle by increasingly embracing the circular economy. The Ellen MacArthur Foundation was launched in 2010 with Renault as a founding partner.

Renault experts engage regularly speak and meet with members of the Ellen MacArthur Foundation to seek out new technical solutions, processes and circular economic models, to liaise on strategic planning and the Groupe’s rollout of the Competitive Circular Economy programme, as well as raising awareness among employees and shareholders.