Recent tests confirm that IVECO is best for gas and diesel 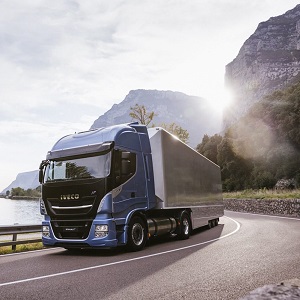 IVECO is proving on the ground that its Natural Power Liquefied Natural Gas (LNG) technology is a viable and financially profitable solution to achieve sustainable long-haul transport. Over 3,000 Stralis NP are being used in the fleets of more than 400 logistics operators on the major European transport routes. This is a tangible demonstration that the vehicle is not only environmentally sustainable, but also delivers the performance and Total Cost of Operation (TCO) that transport companies require for their businesses. This growing trust is also visible in the commercial success of the Stralis NP 460 tractors for which IVECO has already registered more than 1,000 orders in 12 European countries just eight months after its launch.

Pierre Lahutte, IVECO Brand President, says: “Are you still doubting between gas and diesel? The best choice is IVECO. We knew our latest Stralis 480 XP was very good and positioned already among the top market players in terms of fuel efficiency, but our Stralis NP 460 achieved breakthrough results in recent tests conducted by leading European publications in real driving conditions. It tops the ranking with a significant margin over all traditional diesel trucks. The tests confirmed the resulting savings for the owner compared to the diesel equivalent, with no compromise on performance and better comfort due to the quiet operation and lower vibrations. In a year, a Stralis NP 460 clocking up 150,000 km can deliver savings in excess of 10,000 euro on the owner’s TCO compared to an equivalent truck running on diesel and urea”.

Recent tests conducted by European trade publications confirmed that the diesel Stralis XP is in the top rankings in its category for fuel consumption, and that when it comes to natural gas technology, the Stralis NP is the absolute winner.

The Stralis NP 460 in single-fuel version with double LNG tanks has a range of up to 1,600 km and delivers a performance that is equal to an equivalent diesel truck, with the advantage of exceptionally low fuel consumption. It uses up to 15 per cent less fuel, which added to the lower cost of natural gas compared to diesel, results in significant savings. The fact that this technology doesn’t require urea, unlike its diesel counterpart, further cuts down on costs. These factors, together with the long service intervals of 90,000 km, deliver TCO savings of 9 per cent compared to a diesel truck.

The IVECO Cursor 13 NP engine is protected by two patents: the first is the FPT Industrial proprietary knock control that makes it possible to increase the performance, enables the widest fuel compatibility, and protects the engine and three-way catalyst from misfiring. The second one is FPT Industrial’s proprietary reactive air-flow control management system, a new stoichiometric ratio control logic that is applied during gearshifts. This ensures a continuous torque delivery during AMT gearshifting, which enables maximised performance and the fastest gearshift.

The Stralis NP 460 is the first natural gas truck with the latest-generation automated transmission, the new 12-speed HI-TRONIX gearbox which offers the most advanced technology in its category, with 99.7 per cent efficiency, exceptional durability, best-in-class gear spread of 16.7 and torque-to-weight ratio. This new transmission reduces shifting time by 10 per cent compared to the previous model, and offers additional functionalities such as rocking function, four reverse gears and a new offer of PTOs. The HI-TRONIX comes with standard integrated hydraulic retarder and hill-holder function for driver and load safety. On Stralis NP the HI-CRUISE option, a set of GPS-based predictive driving functions such as the predictive gear change and predictive eco-roll, and the EcoSwitch that automatically adapt the engine power and torque to the truck load, are standard features. Together they ensure an outstanding fuel economy especially when driving on hilly routes and on partial load.

IVECO’s natural power technology, together with the fast-developing distribution network, makes the Stralis NP the real, immediately available solution for logistics operators to achieve a sustainable fleet with no compromise on performance and efficiency – giving benefits to their profitability and new business opportunities as the demand for sustainable transport grows.

Logistics operators looking to convert their fleets to natural gas can rely on a fast expanding LNG distribution network, supported by European Commission initiatives such as the Blue Corridors Project and government incentives introduced across Europe to encourage the widespread use of natural gas and biomethane in transport. The network today covers the main European freight routes with over 150 refuelling stations and is expected to reach more than 300 stations by the end of 2018. This development is accompanied by an increase in the production and transport capacity of LNG to meet the growing demand.

With the further development of the distribution network, more logistics operators will join the ranks of the many who have already converted to natural gas with the Stralis NP – leading companies such as early adopter Perrenot, and most recently, Vega Trans, FERCAM, Primafrio and DHL Freight.