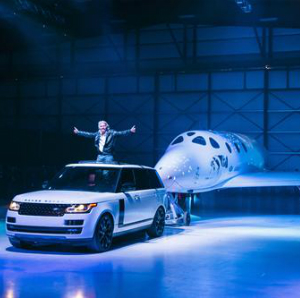 A Range Rover Autobiography, the pinnacle of premium SUV luxury, took centre stage at the global reveal, towing out the new SpaceShipTwo – officially christened VSS Unity, –in front of the world’s media, special guests and a group of Virgin Galactic’s ‘Future Astronauts.’

Guests at the unveiling ceremony including Virgin Galactic’s stakeholders, VIP guests and Future Astronaut customers, watched on as Sir Richard arrived in the Range Rover and the new SpaceShipTwo made its global debut. The event also marked the special official naming moment of the new SpaceShipTwo, with Stephen Hawking announcing the name VSS Unity via a specially recorded message.

Announced in April 2014, the tow-out of VSS Unity by a Range Rover Autobiography marks the latest milestone in the partnership between the two pioneering brands; a partnership based around a strong British heritage and a true spirit of adventure, but underpinned by a desire to push the boundaries of technical innovation.

A fleet of Land Rover vehicles currently provides valuable support for the Virgin Galactic team at its base in Mojave, and will be an important part of its commercial operations  for future astronauts at Spaceport America in New Mexico

Stephen Attenborough, Commercial Director at Virgin Galactic said, “Since our partnership began in April 2014, Land Rover has become an integral part of the team’s day to day operating environment in Mojave. Therefore it was fitting that the Range Rover Autobiography took a staring role in today’s events as our new SpaceShipTwo, Unity, made its global debut. We’re looking forward to more collaborations across the business including STEM programmes as well as engineering, design and product initiatives.”

Mark Cameron, Global Brand Experience Director at Land Rover, said: “This is a significant milestone for Virgin Galactic, and we are proud to be part of it. Helping the team unveil the new SpaceShipTwo not only reflects our supporting role in the Virgin Galactic programme, but it was also an impressive display of the Range Rover’s towing capability. But we have partnered with Virgin Galactic for many more reasons than simply providing and promoting a fantastic range of SUVs.  We share the same long-term vision to invest in innovative design and technology to help us go further and achieve more. Not simply to enable mankind to explore, but to develop this partnership to inspire others.  From our tens of thousands of employees and customers to schools and colleges, motivating more young people to pursue careers in engineering, science and technology – and explore new ways of travelling for future generations. This is a very special match of brands based around a shared vision.”

Both Land Rover and Virgin Galactic run significant and highly regarded community relations and STEM education programmes, which encourage young people to aspire to a future in science, technology, engineering and mathematics.

2015 marked the 21st anniversary of the Range Rover Autobiography, the pinnacle of the Range Rover model line-up. Across two decades Autobiography has denoted the ultimate combination of Land Rover design, capability and luxury, adapting with changing customer tastes and preferences to remain a benchmark in the premium SUV market.