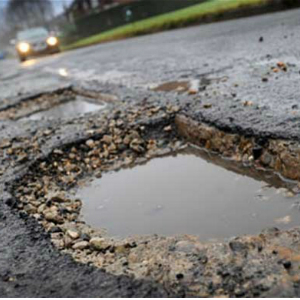 The poor condition of the nation’s roads has hit drivers’ finances hard over the last twelve months, a new study reveals today.  Research for Kwik Fit, the UK’s largest automotive servicing and repair company, has found that in the last year British motorists have had to fund repair bills totalling £684million as a result of damage caused by hitting potholes1.

Across the country, 6.3million drivers suffered damage from hitting potholes in their car, with motorists having to pay out an average of £108.60 for repairs to tyres, wheels, suspension, exhausts or other bodywork. The vast majority of this financial burden is falling on motorists – the Annual Local Authority Road Maintenance (ALARM) survey, also published today, reveals that only £13.5m has been paid out in compensation in England and Wales, just 2.1% of the total cost of damage2.

Kwik Fit found that collectively, the greatest financial impact has been on drivers in the South East, who have had to pay a whopping £108,149,130 for repairs caused by potholes, followed by drivers in London, with the capital’s roads causing £91,368,450 worth of damage.

Per individual driver, the costliest damage was suffered in the east of England, where drivers had to pay an average of £163.68, nearly three times as much as drivers in Wales, where the average repair bill was £61.83.  Welsh drivers have collectively faced the lowest bill of all regions at £12.4million, less than half the cost to drivers in the north east of England, the second lowest region.

2015-16 saw the wettest November-January period on record, and surface water has been a significant factor in many drivers hitting potholes.  31% of motorists who hit a pothole in the last twelve months say they did so because it was hidden by water and they thought it was just a puddle.   Kwik Fit found that nearly half (46%) of those hitting a pothole said they would have risked colliding with other traffic if they had swerved around it.  4% of those hitting a pothole were honest enough to admit that they were driving too fast, and couldn’t stop in time.

Roger Griggs, communications director at Kwik Fit, said: “We all understand that council budgets are stretched right across the country, but this research shows the financial burden being placed upon individual motorists.  And that’s purely the repair bill – it doesn’t take into account the inconvenience to people in having their cars off the road for repairs.  One pothole can cause misery for countless motorists, so it’s vital that local authorities make it as easy as possible for people to report the presence of a pothole.  But we would also encourage drivers to do their bit by reporting the ones they see and not relying on others to do it.

“Fortunately not everyone who hits a pothole suffers damage, but alloy wheels and low profile tyres make our cars more vulnerable to costly repairs when we do.  Sometimes damage won’t appear obvious immediately, so we encourage anyone who has hit a pothole to keep checking their tyres and wheels in the days afterwards.  If they have any concern that there may be damage they can come into any Kwik Fit centre and we will get their car up on our ramps to have it checked out.”

Have you found a pothole con your commute or near your home? Report it here.