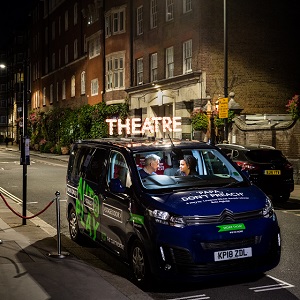 The West End is famous the world over for its diverse and vibrant theatre scene, with playhouses and productions coming in all different shapes and sizes. Now, the West End is to get its most unique theatre ever – one in a car, where the cast sit in the front seats and the audience in the back.

Parked on the iconic Drury Lane, ‘Auto Play’ will be Theatreland’s most petite playhouse, with a maximum audience of just six people per performance. The car theatre, created by insurers MORE TH>N, will stage a production of a brand new play from Olivier Award-winning playwright Bola Agbaje.

Agbaje’s 20-minute ‘Papa Don’t Preach’ focuses on the relationship between a father and daughter. The play unfolds while daughter Laura, 24 (played by Lekhani Chirwa) and her embarrassing but fun-loving dad David, 50 (played by Tony Timberlake) are parked and waiting for an estate agent to arrive outside a prospective flat.

The play explores the familiar theme of a yearning for independence by young adults, and the conflicting emotions this can cause for their parents. MORE TH>N commissioned Bola to write the play after its research with parents revealed the prominent role the car can play in facilitating positive family interactions. Indeed, 45% of those surveyed view the car as the one of the most important places when it comes to getting the family talking, while over half (51%) of parents believe that candid car conversations are particularly beneficial to their family’s mental health and wellbeing. 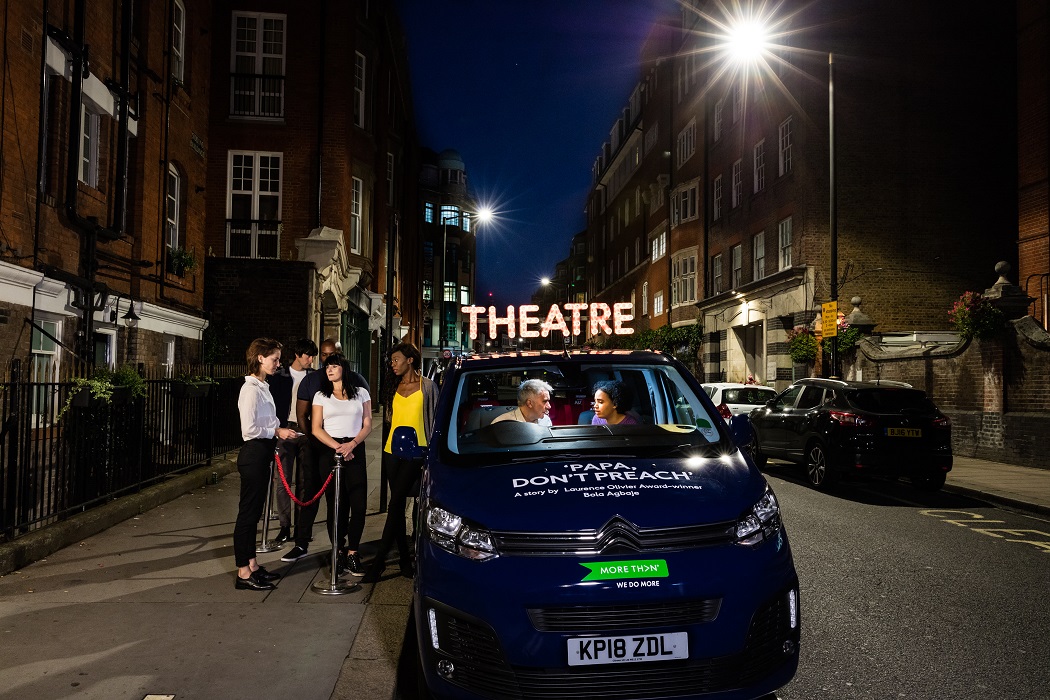 On arrival, car theatregoers will be directed to their seats in the rear of the car (‘stalls’ for those in the middle row, ‘dress circle’ for those furthest back), all of which have been reupholstered in red to mirror traditional theatre seating. Once seated, the cast will appear on ‘stage’ (the front seats) before the performance commences.

Playwright Bola Agbaje commented: “I’m extremely excited to present this unlikely new four-wheeled addition to London’s celebrated West End theatre scene. While it may sound like a particularly strange concept, the story of ‘Papa Don’t Preach’ sets out to champion the kind of heart-warming, funny and important conversations that take place between loved ones inside cars all over the country each day – and what better way of doing this than sitting the audience right in the middle of their real-life setting, in possibly the smallest theatre in the world!”

MORE TH>N’s research, conducted with 1,000 parents, additionally revealed that over a third (38%) see the car as the environment in which they are most likely to bring up a particularly sensitive or important subject matter with their children. Indeed, topics that have are regularly broached in the car include how their child is doing at school (53%), finance and money matters (28%), social behaviour (23%) and relationship advice (18%).

The research also revealed what it is in particular about the car that gets families talking. Topping the list was the fact that there’s little to no distraction from the outside world (43%), followed by the fact it puts people together in small space for a long time (39%) and the soothing effect of being on the road (30%).

A MORE TH>N spokeperson commented: “As our research shows, the car remains one of the most influential and important spaces when it comes to getting families talking and interacting with another, which is key to their overall positive emotional wellbeing. Our Auto Play project aims to celebrate these everyday conversations that so many of us will be able to relate to, by drawing on them as the inspiration behind a surprise new addition to Britain’s acclaimed theatrical landscape.”

The car theatre holds an audience size of up to six people per performance and individuals are allowed to book a maximum of three tickets per performance. To book a free ticket to see ‘Papa Don’t Preach’ please email autoplay@cowpr.com with a preferred date and time.