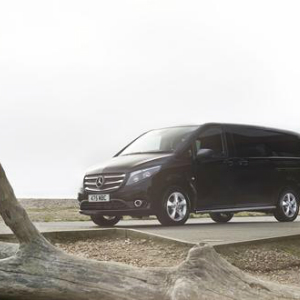 The ever-popular, UK-specific Vito Sport model is now available to order in its New Vito guise. Priced from £25,495 (excl VAT) for the New Vito Sport 116 BlueTEC Compact van, the Vito Sport is available both in a panel van and crew van option, which offers an extra row of seats.

The 116 BlueTEC and 119 BlueTEC engines are both available for Vito Sport, which meet the stringent Euro 6 emission regulations, along with a choice of Compact and Long body lengths.

The already excellent standard specification of the New Vito is further enhanced by a combination of functional and styling features, which set the Vito Sport apart from the norm.

As standard, all Vito Sport models are pre-prepared for the use of the optional plug-in Becker MapPilot navigation system – a cost-effective way of bringing fully-integrated navigation features through the standard Auto 15 headunit and visual display.

The Vito Sport has become a key part of the Vito line-up since its introduction in 2009, and the New Vito variant takes the existing successful formula, and enhances it with improved standard specification and competitive pricing.

Sport-X models are under development alongside the Sport, and expected to be available from Q1 2016.