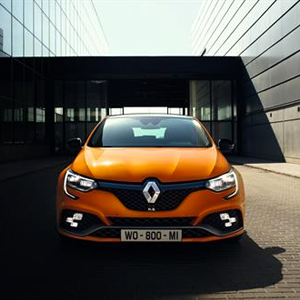 Renault Sport is proud to be taking the wraps off New Renault Mégane R.S. at the 2017 Frankfurt International Motor Show. Since the launch of the original Mégane R.S. back in 2004, the model has carved out a strong reputation in the high-performance C-segment and become widely regarded as a benchmark in its class.

New Renault Mégane R.S. takes Renault Sport’s unmistakeable hallmarks of agility, efficiency and driving enjoyment a step further thanks to a more finely-tuned chassis performance permitted by 4CONTROL technology complete with four-wheel steering, a first in the segment. An all-new 280hp/390Nm engine has benefited from synergies within the Alliance, and, for the first time, New Renault Mégane R.S. is available with a choice of two transmission options.

Order books for New Renault Mégane R.S. will open in the UK in spring 2018.

“I was involved in New Renault Mégane R.S.’s development and I am proud to be its ambassador. Thanks to the new technologies it packs, including 4CONTROL technology, New Mégane R.S. is even more efficient and nimble than its predecessor. It’s a delight to drive.”

New Renault Mégane R.S. stands out through its specific proportions. In addition to the bespoke lines of its flanks, including wider wings which have been extended by 60mm and 45mm at the front and rear respectively compared with Mégane GT. Meanwhile, its overall width has been increased and new 18 and 19-inch wheels have been designed to provide a better stance and further enhance cornering performance.

A Formula 1-style blade which, in addition to being a Renault Sport styling hallmark and symbolic of Renault’s commitment to Formula 1, is picked out in a distinctive Gun Metal Grey satin finish that contrasts sharply with the bodywork’s high-gloss sheen.

A wide air intake to provide air for the intercoolers and engine cooling.

The design of the sides features:

A silhouette inspired by New Renault Mégane, with sculpted, sensuous lines accentuated by the R.S. version’s wider tracks and wings.

A specific sill design incorporating a black blade that runs along the bottom edge to visually connect the front and rear of the car and suggest a ‘flat floor’ effect, a common feature in motorsport.

A working diffuser inspired by the world of Formula 1 to negate lift at higher speeds.

A specific new body colour
A new body colour has joined the Mégane R.S. family – Volcanic Orange. Like Renault Sport’s iconic Liquid Yellow, the new finish benefits from special work to combine a unique sheen with a special effect as light reflects off the body. It also injects added dynamism and is perfectly coordinated with the car’s cabin where the following features contribute to New Renault Mégane R.S.’s distinctive interior ambience:

A choice of two upholsteries (‘carbon fibre weave’ or Alcantara®),

Renault Sport’s visual branding common to both its road cars and the world of racing
Renault Sport took advantage of the presentation of Renault’s latest Formula 1 car – the R.S.17 – in London, in February, to reveal its new logo which is shared by Renault Sport Racing and Renault Sport Cars. Now, for the very first time, this badging – emblematic of Renault’s sporting heritage – appears on the tailgate of one of the brand’s road-going models – New Renault Mégane R.S.

4CONTROL chassis: an exclusive in New Renault Mégane’s class
Renault Sport’s acclaimed engineering expertise has taken the performance of New Renault Mégane R.S. to a new level thanks to two new features that are unique in the car’s segment.

Courtesy of Renault’s 4CONTROL system with four-wheel steering (a standard feature of both the model’s Cup and Sport chassis versions), New Renault MéganeS. is even more nimble through tight turns and more stable when cornering at higher speeds. The steering is more incisive while the turning circle is even tighter when manoeuvring. Carefully configured by Renault Sport, 4CONTROL generates a whole new level of driving enjoyment in the segment.

Front and rear hydraulic compression stops, a technology derived from the world of motorsport, provide additional damping and eliminate the effects of rebound by performing the following functions:

They ensure a high level of chassis efficiency on the Cup chassis version irrespective of the type of road.

Combined with the Sport chassis, they deliver unprecedented comfort in the segment.

New Renault Mégane R.S. carries over the key features that helped to forge the success of previous-generation versions.

The PerfoHub independent steering axis front suspension has been completely redesigned to cater for New Renault MéganeS.’s new geometry and is stiffer than before.

The new Torsen®limited slip differential that comes with the Cup chassis features different lock-up values under acceleration and deceleration for enhanced traction and higher cornering speeds.

The suspension settings of both versions are specific (springs, dampers, bump stops and anti-roll bar stiffness).

An all-new engine that benefits from synergies within the Alliance
New Renault Mégane R.S. is equipped with an all-new turbocharged engine equipped with direct fuel injection.

To enable this engine to produce this level of power and torque under the bonnet of New Renault Mégane R.S., Renault Sport focused its development work primarily on the cylinder head, air intake and exhaust.

The cylinder head has been completely redesigned with combined input from the experts at Renault Sport Cars and Renault Sport Racing Formula 1 engineers.

This engine emits 155g/km of CO2 (a considerable 11% reduction compared with the previous generation Mégane R.S.), while NEDC combined-cycle fuel consumption stands at 6.9 litres per 100km (which equates to approximately 41mpg).

The ratios and gearshift calibration were developed by Renault Sport to combine performance with efficient fuel consumption, while the EDC transmission’s gear shift times have been optimised for greater performance and driving enjoyment.

The EDC transmission stands out through a number of specific features:

Paddle-shifters – of a type similar to those used in motor racing – allow the driver to change gear without having to take their hands off the steering wheel when cornering.

Multi-Change Down technology ensures fast sequential down-changing and allows drivers to downshift several gears in quick succession under braking. This ensures the vehicle is in the most appropriate gear to tackle the following corner.

Launch Control for optimised getaways, directly inspired by motorsport technology. This is available in either Race mode or Sport mode, where it works in conjunction with the specially-adapted traction control to produce a textbook start even in low-grip situations.

A 300 horsepower / 400Nm Trophy version
Before the end of 2018, Renault Sport will introduce a Trophy version of New Renault Mégane R.S., the engine of which will produce 300hp and 400Nm of torque. It will incorporate a number of technologies geared to performance, including the Cup chassis and 19-inch wheels as standard equipment.

Upgraded R.S. Monitor
Thanks to its on-board telemetry system, R.S. Monitor, Renault Sport extends the R.S. experience beyond the act of simply driving. The latest version features new graphics and is even more user-friendly, with a choice of two configurations:

R.S. Monitor displays the driver’s performance in real time on the R-LINK 2 screen.

R.S. Monitor Expert provides drivers with the opportunity to connect a camera (either an independent camera or their smartphone camera) to film their drive. They can then play back and analyse their run thanks to the incorporation of performance data in the image. They can even share the film on social media.

There is a bespoke website for Renault Sport customers.

R.S. Replay allows owners to engage with other members of the Renault Sport community by uploading their recordings, playing them back and comparing runs.

Performance in all situations

R.S. Vision, Renault Sport’s lighting system
Already a feature of New Clio R.S., Renault’s multi-reflector R.S. Vision LED lighting system was a natural choice for New Renault Mégane R.S. Taking the form of a chequered flag – another nod to the world of motor racing – it is incorporated in the front bumper and frames the F1-style blade. This patented technology, which is exclusive to Renault Sport, delivers high-performance lighting and includes the fog lights, cornering lights and dipped and main beam head lights. R.S. Vision stands out as an unprecedented lighting package in New Renault Mégane R.S.’s segment to ensure a level of visibility worthy of the car’s high-performance pedigree.

A personalised experience courtesy of MULTI-SENSE
Renault’s MULTI-SENSE system and its choice of five driving modes personalise the driving experience by adapting engine response (via the pedal mapping), the firmness of the steering and gear shift speeds.

Comfort mode: helps to minimise fuel consumption during everyday use.

Normal mode: the ideal compromise between comfort, acoustics and performance.

Race Mode: designed for track use and unfettered performance thanks to sportier 4CONTROL settings for enhanced agility, with the ESC turned off.

Perso mode: New Renault MéganeS.’s technologies can be activated or switched off at will to enjoy a truly personalised drive.

The R.S. Drive button provides shortcut access to the Sport and Race modes thanks to a short or long press respectively.

Driver aids designed for everyday use
Now a five-door hatchback, New Renault Mégane R.S. is even more suited to everyday use, while losing nothing of its dynamic, sporty character.

A suite of Advanced Driver Assistance Systems (ADAS) allows it to be driven in all types of situation.

Its palette of driving aids – all accessed and activated or deactivated via the R-LINK 2 tablet – provide the following functions: