New Head Of Lab Of The Seat 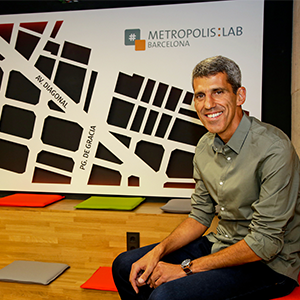 Jose Nascimento has been appointed Head of Lab of the SEAT Metropolis:Lab Barcelona, which is wholly owned by SEAT and which joins the Volkswagen Group’s worldwide network of IT-Labs in Berlin, Munich, San Francisco and Wolfsburg.

The facilities are headquartered in the Pier 01 Barcelona Tech City, the reference hub for Europe’s entrepreneurial ecosystem and which SEAT launched last April. Jose Nascimento will fill the role reporting directly to the Management Board of the SEAT Metropolis:Lab Barcelona, which is headed by SEAT President Luca de Meo, Vice-President for R&D Dr. Matthias Rabe and Vice-President for Finance, IT and Organization Holger Kintscher.

The goal of this centre of excellence is to analyse and find smart solutions for the challenges facing mobility of tomorrow and to contribute on SEAT positioning as a front runner in connected car, relying on a combination of mobile technology and big data to optimise the relationship between the public, the smart city and mobility services provided.

Jose Nascimento will be the Head of Lab of the SEAT Metropolis Lab: Barcelona where 23 specialists will be working in the first year, including engineers, developers and data scientists. The team is expected to grow to 50 employees in the next few years.

These specialists will be in charge of creating software and algorithms related with mobility service using the data obtained from vehicles, from Barcelona as a Smart City and from pedestrian input. Among the key areas of activity in the initial stage are developing predictive navigation solutions, traffic management and apps such as Parkfinder, which detects available parking spaces in the city.

Nascimento underlined that he is “proud to be a part of a company such as SEAT, a prominent benchmark in connected car and which promotes solutions to ease mobility in cities”. Jose Nascimento holds a post-graduate degree in Economics from London University and an MSc in Computer Science from Florida Tech. With a background of more than 20 years in the field of technology in different industries, Nascimento has been Director of Technology of the Hailo taxi app, where he has been the chief technology officer since 2010. His career highlights include Chief Software Developer at eCourier, Technical Team Lead at UBS Investment Bank, and British Airways. His solid background made him the most suitable candidate to lead this project with help from the city’s innovative, entrepreneurial ecosystem.

The opening of this digital lab in Barcelona is in line with SEAT’s strong commitment to working more closely with the city, sealed in a signed agreement with the City Council in December 2016, based on promoting innovation, sustainable mobility and launching entrepreneurial projects, among others.

An example of this commitment is the carsharing pilot project set up by SEAT using a fleet of electric drive eMiis. This fleet, which will be available to the more than 1,000 workers of the SEAT Metropolis:Lab Barcelona and the Barcelona Tech City, is equipped with Digital Access technology, which has been designed for collaborative economy environments and which enables mobile access to vehicles without the need for a physical key.

The kick start of the SEAT Metropolis:Lab Barcelona coincides with the company’s digital transformation, led by the Easy Mobility Team, which aims to rise to the upcoming challenges facing the automotive sector as a result of electrification, digitalisation, new mobility services and the connected car.