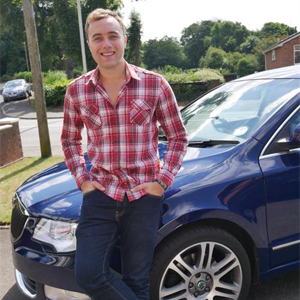 After the completion of its ‘Get Into The Driving Seat’ recruitment competition, IAM RoadSmart has announced that David Gallagher will be its next Younger Driver Ambassador for 2017/18.

David, 23, from Sedgley near Wolverhampton, triumphed in the closely fought contest, which saw him and a number of other finalists get a grilling from a team of judges that included the 1992 Formula 1 World Champion Nigel Mansell, IAM RoadSmart Chief Executive Officer Sarah Sillars, and founder of First Car magazine James Evans.

David follows in the footsteps of Eloise Peabody-Rolf, who has successfully held the position of Younger Driver Ambassador from last September to August 2017. The following month she goes to university.

The role, which is a one year internship, was widely promoted through IAM RoadSmart’s communication channels and via a nationwide media campaign.

The Younger Driver Ambassador is a high-profile position with the successful candidate becoming the voice of younger drivers nationwide. In his new role David will take on a variety of responsibilities including lobbying for change within the organisation, travelling up and down the country visiting schools and colleges, and working with the charity’s 200+ groups throughout the UK as they look to attract younger drivers to the IAM RoadSmart community.

David’s car credentials go back a long way. He learnt to drive unofficially age 11 on private land and confesses to being into ‘anything with an engine’ including ride-on lawnmowers!

Since leaving school David has held a variety of jobs including assistant to club photographer and groundsman at West Bromwich Albion and swimming coach at Bilston Swimming Club. Now with six years of driving experience without a single incident, David now drives a Skoda Superb.

“I am delighted to have landed the job and can’t wait to get started. I feel it’s really important to get younger drivers interested in what IAM RoadSmart can offer while they are still in the learning mindset. I really hope I can make a difference, even in a small way.”