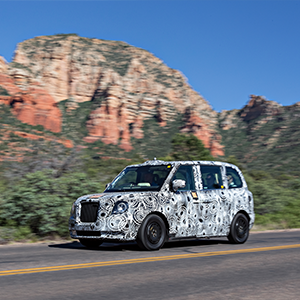 One of London Taxi Company (LTC)’s all-new range extended electric taxi test vehicles will feature in the ‘First Glance’ paddock at the Goodwood Festival of Speed later this week. This vehicle class showcases the latest prototype and concept vehicles from around manufacturers around the world.

Each day of the Festival, which runs from Thursday 29 June until Sunday 2 July, the electric taxi prototype will silently make the world famous Goodwood Hillclimb, making its world dynamic debut in front of some of the 200,000 visitors at the West Sussex motoring extravaganza.

Taking the wheel will be young racing driver, currently the fastest woman in the Ginetta championship, 17 year old Katie Milner – completing a trio of firsts for the London Taxi Company at the Goodwood Festival of Speed (FoS): the world dynamic debut of their electric taxi, the first taxi ever to feature on the famous ‘Hill’ and the youngest female driver ever to take part in the Hillclimb event.

Each day the electric taxi will also be presented on the live stage at the FoS Michelin Supercar Paddock, alongside some the fastest and most valuable cars on Earth. LTC have been invited to participate on this stage because of the taxi’s adaption of supercar manufacturing techniques. LTC’s extensive use of light weighting means that LTC can get the maximum distance out of the electric battery without impacting the strength and safety of the vehicle.

LTC’s appearance at FoS follows a rigorous period of testing across the world for the all-new electric taxi, which has included weeks and thousands of miles in both hot and cold climate endurance tests in the Arizona desert and Arctic Circle, respectively.

On sale later this year, LTC’s new electric taxi will be the most comprehensively tested product in the company’s history. With well over a million miles covered so far, these test vehicles have been more extensively tested than any of LTC’s last three taxis combined. This is not just to meet the exacting standards of London’s cab drivers but the requirements of drivers and climates of cities all around the world.