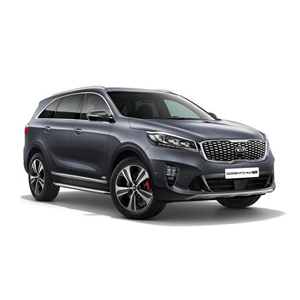 Kia Motors Europe has announced a range of upgrades to the Sorento, the company’s seven-seat flagship SUV. The new Sorento will be on public display for the first time at the 2017 Frankfurt International Motor Show, and is due on sale across Europe from Q4 2017.

The new Kia Sorento features a refreshed exterior and interior design, and is available with Kia’s latest safety and in-car connectivity technologies. A new GT Line variant is also available, as well as an efficient new eight-speed automatic transmission for 2.2-litre diesel model.

Michael Cole, Chief Operating Officer of Kia Motors Europe, commented: “The Sorento accounted for 15,769 sales across Europe in 2016, and it remains an important contributor to the company’s sustained sales growth. The current model has a broad appeal among buyers, with a combination of high practicality, handsome design, and good value. Upgrades to the car’s exterior and interior design, safety, and in-car technology all add to the appeal of the car and will ensure sales remain strong.”

Design: updated exterior and interior design
Kia’s designers have made a series of modifications to the Sorento’s exterior design. These include revised front and rear bumpers, new LED head- and tail-lamps, and a new dark metallic finish to the ‘tiger-nose’ grille. The result is a more sophisticated and purposeful front-end appearance. New Rich Espresso and Gravity Blue exterior paint finishes are now available, as well as a new design for the Sorento’s 17-, 18- and 19-inch aluminium alloy wheels.

The new Sorento features an increased proportion of soft touch materials and leather for a more premium cabin ambience. Customers can specify the interior in single-tone (black) or two-tone (black and stone beige), with cloth or leather upholstery. Optional brown or light grey leather upholstery is also available. The driver and front passenger seats are equipped with four-way and two-way adjustable lumbar support respectively, to enhance seating comfort.

The new transmission offers four different drive modes: Eco, Comfort, Sport and Smart. Drivers can select their preferred mode with the Sorento’s electronic Drive Mode Select system. Each mode enables the driver to customise the powertrain’s responses to driver inputs, enhancing fuel economy or acceleration characteristics depending on driver preference. The Drive Mode Select also adapts the weight of the rack-mounted power steering system, for more relaxed or more immediate, engaging steering responses. The new Smart Mode is designed to understand and anticipate the driver’s steering preferences, automatically switching between Eco, Comfort and Sport modes. This enables the Sorento to adapt to the driver’s steering behaviour as road conditions change, pre-empting the driver’s preference for different speeds and driving environments.

The interior of the GT Line includes the same improvements as the standard car, and also features quilted seats, finished in black leather with contrasting grey stitching and GT Line embroided emblems. In addition, the new variant features unique gear shift paddles and a series of satin chrome highlights throughout the interior.

The new Driver Attention Warning (DAW) system combats distracted or drowsy driving. The system monitors a number of inputs from the vehicle and the driver. It sounds a warning chime and displays a graphic in the instrument binnacle if it senses a lapse in concentration from the driver. In Europe, driver fatigue is believed to be a key factor in up to a quarter of all fatal traffic accidents across the continent*. The USA’s National Highway Traffic Safety Administration conservatively estimates that 100,000 police-reported crashes are the direct result of driver fatigue each year. In the USA, this results in an estimated 1,550 deaths and 71,000 injuries annually.**

Other new safety features available on the Sorento include: Lane Keeping Assist System; High Beam Assist, and full LED headlamps with Dynamic Bending Light. These new technologies make the Sorento one of the safest cars in its class.

On-sale from Q4 2017
Backed by the company’s quality promise, the new Kia Sorento is sold as standard with the company’s unique 7-Year, 100,000 mile warranty. It goes on sale across Europe from Q4 2017. UK specification and pricing information will be announced at a later stage

Body and chassis
Five-door, five- or seven-seater SUV, with all-steel unitary construction bodyshell. Choice of diesel and gasoline four-cylinder engines driving the front and rear wheels via a six-speed manual, or six-speed or eight-speed automatic transmission – depending on model.