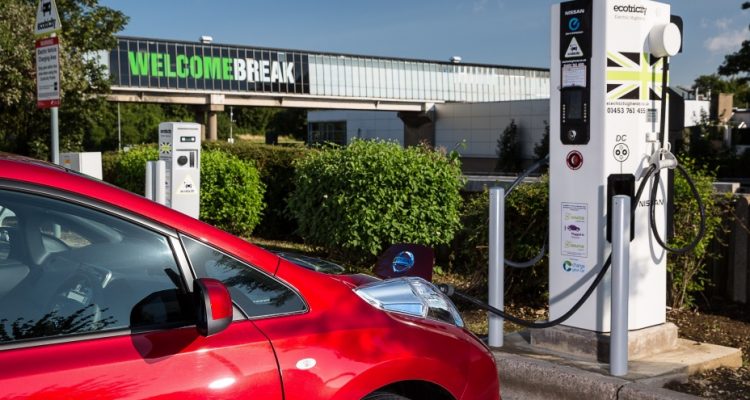 The UK new car market enjoyed a boost in August, as year-on-year demand rose 23.1%, according to the latest figures published today by the Society of Motor Manufacturers and Traders (SMMT). 94,094 new cars were registered in the month as the market responded to regulatory changes, with cost-savvy buyers taking advantage of some compelling deals in what is always one of the year’s smallest months.

Demand was up across the board, with consumers and fleets boosting year-on-year registrations by 23.3% and 19.7% respectively, while the smaller business sector rose 166.4%, equivalent to an uplift of around 1,500 units against August last year. Superminis remained the most popular buy, followed by small family and dual purpose cars, with the luxury saloon and city car segments recording the most notable growth, up 120.8% and 39.6%.

Meanwhile, the UK’s growing range of hybrid, plug-in hybrid and pure electric cars continued to attract buyers, with a record one in 12 people choosing one.1 Demand surged by a substantial 88.7%, with the sector accounting for 8.0% of the market – its highest ever level – as billions of pounds of manufacturer investment help deliver more ultra-low and zero emission models to the market.

In the year to date, the overall market remains down by -4.2%, in line with forecasts after a turbulent first eight months. However, demand remains at a high level with more than 1.5 million new cars featuring the latest in advanced safety, emissions and convenience technology joining British roads so far in 2018. 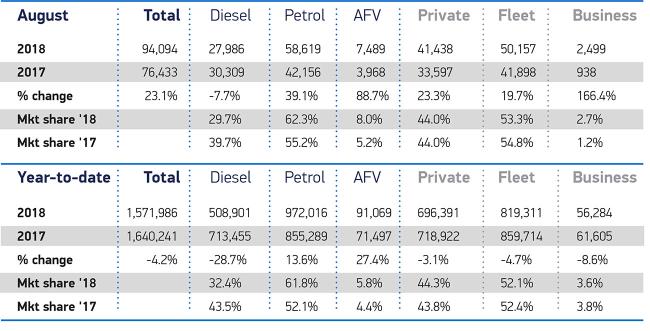 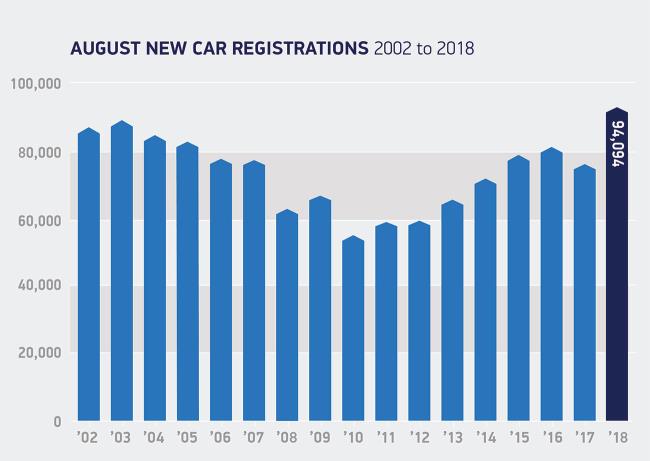 Mike Hawes, SMMT Chief Executive, said, “It’s great to see such strong growth, particularly in the important electric vehicle market. However, given August is always a small month in new car registrations ahead of the important plate-change month of September, it would be wrong to view the market as booming. Indeed, this past month has seen some significant variances as regulatory changes have disrupted some supplies. In the long term, however, the new emissions certification test will give consumers renewed confidence in the performance of all vehicles, helping them choose the latest, cleanest technology that best suits their driving needs, whether that be petrol, diesel, hybrid or plug-in.”

Sue Robinson, Director of the National Franchised Dealers Association, commented: “The UK new car market performed well in August, ahead of the introduction of the Worldwide Harmonised Light Vehicle Test (WLTP), with vehicle sales up 23.1%. However, the introduction of this new emissions regulation will give rise to a distorted market during the remainder of the year and into 2019 and, with diesel vehicles down 7.7%, NFDA continues to urge the government to clarify its position on diesel vehicles, particularly given the newer, more accurate testing coming into place.”

Jon Lawes, Managing Director, Hitachi Capital Vehicle Solutions reacts to SMMT car sales figures “An 88.7% year-on-year surge in motorists buying hybrid or electric cars marks a real milestone for the sector. One in 12 of all cars bought in August was hybrid or electric and we can see that these types of vehicles are rapidly growing their market share, which suggests that consumer demand for alternative fueled vehicles (AFVs) is gaining pace.

“August is traditionally a quieter time for new car sales, as many motorists look ahead to September’s new number plates, so the real proof will be whether this trend continues next month.

“For businesses, going green can save huge amounts of money. Our own research has found that if every van and HGV was powered by electricity, approximately £14 billion could be saved on fuel costs. While greater investment in infrastructure for AFVs is still needed, it’s hugely encouraging to see the industry adopting cleaner vehicles.”

Ashley Barnett, Head of Consultancy at Lex Autolease, commented: “August is traditionally a weaker month for new car registrations as many drivers await the new number plate release and consumer spending is diverted over the summer.   This year is no exception, although it is encouraging to see that the market is up compared with 2017.

“It is positive to see record demand for alternatively-fuelled vehicles (AFVs), but to meet the ambitious targets set out in the government’s Road to Zero strategy, we need to build on this momentum. An additional 100,000 new AFVs will be needed each year between now and 2030, in order for Ultra Low Emission Vehicles to comprise 50% of new car sales.

“The UK leasing industry will play a significant role in helping to meet government targets, and is key to transitioning the 31m cars on UK roads to newer, cleaner technology – not just in the company car market, but for individual drivers too.

“Looking ahead to September, we are confident that the market will pick up in line with demand for the new 68 plates. Although Worldwide Harmonised Light Vehicle Test Procedure (WLTP) data will be more widely available, we do not expect this to have an impact until after the Autumn Budget, which we hope will bring much-needed clarity around vehicle taxation.”