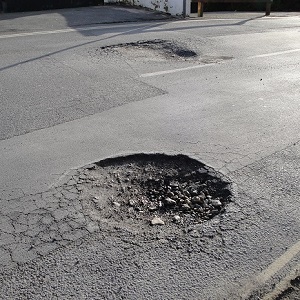 Motorists are becoming ‘increasingly disillusioned’ with the state of UK roads, with nearly half experiencing damage due to potholes – according to a new survey.

In the IAM RoadSmart survey, completed by 7,275 of the charity’s members, 47% of respondents said they have experienced damage to their car, commercial vehicle, motorbike or bicycle – or suffered personal injury – as a result of hitting a pothole.

Approximately 90% of respondents said they have ‘spotted a deterioration of some level in the roads they use’ in the past three years – with just over 50% describing them as ‘much worse’, and 38% rating them ‘worse.’

81% say they have noticed ‘many more’ potholes, with an additional 13% saying they had seen ‘a few more’. 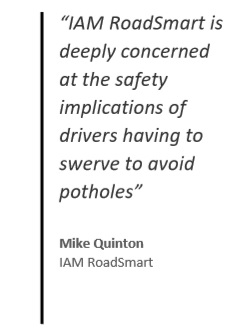 More than 56% said they have to take avoiding action on every journey to dodge potholes, while 27% say they have to steer around a pothole every day.

While a third of IAM RoadSmart members expressed a willingness to consider new funding ideas to help improve the UK’s roads, half were against a 2p increase in fuel duty.

Mike Quinton, chief executive officer of IAM RoadSmart, said: “IAM RoadSmart is deeply concerned at the safety implications of drivers having to swerve to avoid potholes as well as the high level of damage and injuries revealed by our survey.

“We are looking to the authorities to work together to produce a long term and sustainable plan to reduce the backlog of road maintenance before yet another damaging winter sets things back even further.

“The figures from our survey are compelling and it is increasingly clear that those who use the roads on a daily basis are pretty much united on this one – enough time has now passed for a long term plan to be in place and for work to have started.

“As our survey has shown, this is now the motoring public’s number one priority.”