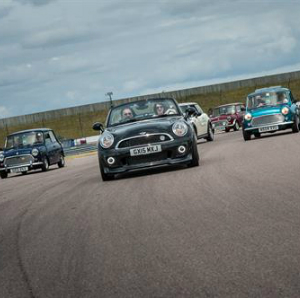 The results are in from the Mini Census and we love the diversity; Minis owned by people of all ages from all over the world have submitted their (often quirky) car names, some named after family members, other named after fictional characters – the results really show the individuality of the Mini brand and its customers.

Over half of the world’s Minis are boys, with the most popular name being Marvin, according to the world’s first ever Mini Census.

The survey, carried out by the organisers of Mini World Live, which takes place at Rockingham Motor Speedway, Northants, on July 10, 2016, received responses from Mini owners all over the globe, including places as far afield as Australia, New Zealand, Sri Lanka, Malta and the USA.

The results show that in total, 51% of the world’s Mini population is male, 35% are female and 14% are neither – although anyone who’s ever owned a Mini knows it’s more than just a car.

Among the boy Minis, the most popular names are Marvin, Tommy (Cooper) and Jack, although there’s a developing trend towards the names Dave, Stuart and Bob, made famous by Minions – The Movie. Girl Minis tend to follow a more alliterative tone, with Minnie (perhaps unsurprisingly), Mollie and Millie being the three most favoured names.

Some of the more unusual names that owners have given their Minis include Pingu (because he’s white with a black roof), Tetley (because he has more holes in him than a tea bag) and Mojo Jojo (after the evil monkey in The Powerpuff Girls). Randomly, one correspondent has also named her Mini Leigh Halfpenny after the Welsh rugby international (because he’s smallish, gorgeous and powerful).

Commenting on the survey, Mini World Live event manager, Katherine Chappell, said: “Mini owners have a real sense of community, and their cars are just as much a part of that community as they are. Minis, both old and new, are the most celebrated and characterful cars in the world, and with Mini World Live we want to celebrate that character.”

Following the show’s debut in 2015, which brought thousands of Mini enthusiasts to the Northants venue, the organisers are promising even more action and more of a festival feel for the show, which is backed by three major Mini-related magazine titles – MiniWorld, Mini Magazine and Modern MINI.

The show will feature attractions catering for fans of both classic and modern Minis, including a concours competition, individual entries, a huge retail village, show and shine areas, club displays and on-track action, the details of which will be confirmed nearer to the date.

For more information about the show, click the link below.