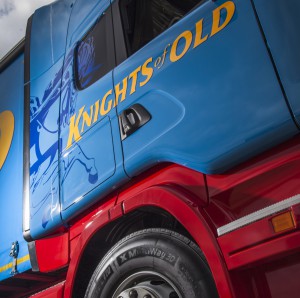 Logistics specialists Knights of Old are reaping the benefits of Michelin tyres after a demanding trial saw the new wheels clock up more than 300,000km.

After a year of ‘impressive’ performance, the company decided to switch their entire 418-strong fleet to Michelin for both their original equipment and replacement needs.

Servicing and maintenance, meanwhile, were carried out by the company’s tyre service provider, Tyres Northampton.

A further 12months on, Knights of Old’s original test tyres have covered more than 300,000km over two demanding years in service.

Pleasingly for Knights of Old, the tyres had 5.5mm of tread still remaining when the vehicle was returned to Scania at the end of its lease.

At this stage, the tyres had already exceeded the previous fitment’s average mileage by 50,000km, reaffirming the company’s decision to switch to Michelin.

Kelvin Gingell, Technical Director at Knights of Old, said: “We are a very forward thinking company and are always looking for ways we can improve our service and make our fleet operate more efficiently.

“This has included terrific mileage performance, topping our previous premium fitment by a significant margin, plus Michelin has also been proactive in working with our local tyre dealer and vehicle suppliers to ensure we get the maximum performance from our rubber.”

All Michelin tyres are designed to offer multiple lives, to ensure they deliver the lowest total cost of ownership.

Had the initial Scania remained in service, it is projected its steer tyres would have achieved 355,000km before needing to be regrooved at 3mm – a process which extends tyre life by up to 25%.

Once the regrooved tyres had worn to the legal limit, they would have been sent to Michelin’s Remix factory in Stoke-on-Trent to be comprehensively remanufactured.

They then would be put back into service, and finally regrooved again.

Knights of Old’s fleet consists predominantly of Scania and Iveco vehicles operating at up to 44tonnes.

Their vehicles service the whole of the UK and Ireland, each travelling approximately 165,000km a year.