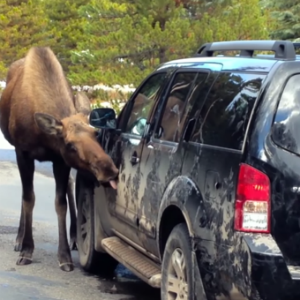 Motorists in the Alberta province of Canada have been warned about wild moose who have been seen licking salt from their cars.

The strange behaviour has been spotted by many locals and visitors of the Peter Lougheed Provincial Park, west of Calgary.

Alberta Parks have issued a statement warning people not to approach or try to push the creatures away. In Canada, a female moose weighs an average of 750 to 926 pounds and a male moose averages between 992 and 1,102 pounds so pushing probably wouldn’t work anyway but you would also risk angering a wild animal which is never a good idea. 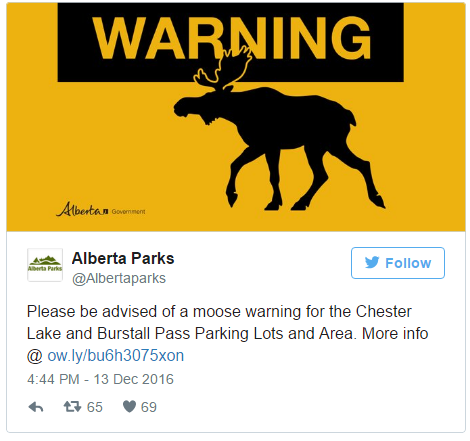 Dr Doug Whiteside from Calgary Zoo explained that moose and other wildlife ordinarily get all the salt they need in their diets. “If there is no natural source of salt available they will find an alternate source, like the salt from the roads on vehicles,” he says.

Anyone who experiences and aggressive encounter with a moose has been urged to report it, but in order that vehicle owners avoid such an encounter, the advise is to observe from a distance of 30 metres.

As this will  be our last story of 2016 we would like to wish you all a very merry Christmoose and look forward to bringing you more Fleetpoint updates in the new year!