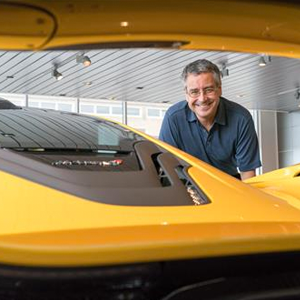 McLaren Automotive today announces a further strengthening of its North American communications team, during a period of unprecedented growth for the brand in the region, with the addition of Roger Ormisher to the new position of Vice President, Communications and PR.

He will report directly to McLaren Global Communications and PR Director, Wayne Bruce, who is based in the company’s Surrey, UK headquarters, and regionally into the McLaren North America President, Tony Joseph, located in New York.

Roger Ormisher will be responsible for developing and implementing a press communications strategy to enhance and grow the visibility of the McLaren brand on the back of the recent launches of the 720S and 570S Spider, both new to the US market in 2017. Ormisher brings more than 30 years of global experience in both marketing and PR in the automotive industry, spanning three major continents – Europe, the US and Asia. He held senior communications positions at Volvo Car Corporation, Nissan Corporate and Fisker Automotive and most recently was responsible for starting a new automotive experiential business for the Nth Degree agency in California, United Sates.

“I am thrilled to be joining such an illustrious brand at this moment in its growth,” says Ormisher. “With the company having nearly doubled its sales globally in the last year, some amazing new product just arriving on North American shores and a further 13 new models in the pipeline as part of McLaren’s vision for 2022, I’m excited to help grow the brand and maybe play a small part of history in the making.”

Commented McLaren Automotive Global Communications and PR Director, Wayne Bruce: “Roger brings a broad range of experience in communications, PR and brand building to the table for McLaren at a key point in our plans to secure a greater share of the North American market. We now have all the pieces in place to tell our exciting brand story to a wider audience in the US.”

Roger joins the McLaren Automotive team in the US on October 30 and will work alongside recently hired PR executive, Laura Conrad, and Global lifestyle PR agency, Sidhu and Simon, in his new role.

Asda has announced a market first as it launches a new fleet of home delivery vans, which will aim to drive down carbon emissions and reduce the

Poor positioning of satnav devices on car windscreens is

Moneyshake submitted a Freedom of Information request to find