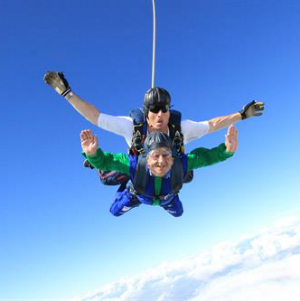 One of the industry’s key business leaders has swapped the boardroom for the open skies, jumping out of a plane at over 10,000 feet to raise funds for BEN, the charity dedicated to supporting those working in the automotive industry.

Marshall Motor Holding’s CEO, Daksh Gupta, completed the jump as the pinnacle of a year of fundraising, in BEN’s first ever Industry Leader Challenge event.  Conquering his fear of heights has paid off, as currently the fundraising total stands at £142,000. Daksh hopes that the total will reach £150,000 once the final pledges from the last few companies come in.

Daksh Gupta completed his tandem skydive on Friday 22nd July, parachuting out of the plane at the Hinton Skydive Centre in Brackley, Northants.

Speaking after the jump, Daksh said: “I must admit the worst thing is going up. I was having second thoughts up there but it was amazing. We actually jumped from 13,000 feet, not 10,000. On the way up I was thinking “crikey this is really high” and that’s when your stomach goes. I can tell you I definitely wouldn’t do it again. It was amazing but once is enough! When you come out of the plane you’re actually doing 140 miles an hour freefall for about 50 seconds. You watch the earth come rapidly up to meet you and that’s the worst part – then you’re praying for the parachute to open. I was definitely glad to be back on the ground afterwards. This had to be one of the highlights for me in terms of life experiences. It was amazing, but seriously, I’m never doing it again!”

Along with the jump Daksh charged his dealership network to compete to raise cash for BEN, over a week of fundraising events which included team barbeques, a carnival, cycle rides, sponsored walks and a spinathon. Over 300 dealers, dealership groups, manufacturers, suppliers, financial services and individuals generously sponsored the challenge.

Daksh said:  “I have really enjoyed taking part in the first ever Industry Leaders Challenge event for BEN and I’m thrilled that we have raised such an impressive amount of money. The funds raised will directly help those working in the industry when they need it the most. I would like to give my heartfelt thanks to my colleagues for getting fully behind this campaign as well as to everyone who donated; I couldn’t have done it without you. Following the jump I received the very sad news that my mother had passed away. She always encouraged me to support charities and help people those less fortunate than me, so I’d like to dedicate this jump to her.”

Jools Tait, Business Development Director at BEN, said: “What a phenomenal achievement. Daksh you are a superstar and we can’t thank you and your sponsors enough!

“The funds raised will have a hugely positive impact, and will help BEN reach more people in the industry, allowing us to provide more practical support, advice and guidance to those who need it.  BEN relies on our industry’s support and we are incredibly grateful to everyone who contributed to this challenge.”

BEN has already identified the next leader who will take on a challenge in 2017 and this, and the final amount raised by Daksh, will be revealed at the annual BEN Ball at the Grosvenor House in December.

You can support Daksh and BEN by sponsoring them here