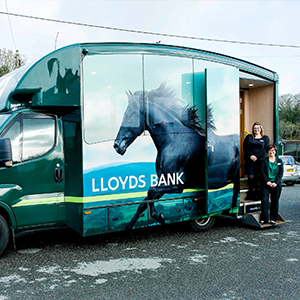 These first mobile branches will serve local communities in and around Carmarthen and Ebbw Vale in South Wales, St Austell in Cornwall, Totnes in Devon, Chester-le-Street in County Durham and Cirencester in the Cotswolds. They are the first of eight mobile branches which will be introduced across the Lloyds Bank network by April, extending the existing fleet of eight which are already operating in the Bank of Scotland network.

The bespoke builds are based on a medium wheelbase Iveco chassis cab with six speed gearbox and a Euro6 engine. The chassis and branch unit were assembled by Doncaster-based vehicle specialists Cartwright Conversions. As part of the conversion, a wheelchair access lift has been incorporated into the entrance step-well.

The mobile branches were designed and constructed to ensure ease of maintenance, keeping them on the road where and when they’re needed. They will be operated by G4S with ongoing fleet management and maintenance provided by BT Fleet.

“Our expertise in total fleet solutions will ensure we keep Lloyds Bank’s mobile branches on the road, enabling them to support their customers. And, working in partnership with a core supplier base of British businesses, this is another way Lex Autolease is supporting Lloyds Banking Group’s aim of helping Britain prosper.”

Steve Shaw, Commercial and Operations Director at Cartwright Conversions Ltd said, “We worked in close partnership with Lex Autolease through every step of the bespoke build to ensure the mobile branches were fit for purpose. The combined expertise of our Manchester and Doncaster sites were involved from design to delivery and it was a pleasure to hand over the first three of these great looking and hard-working mobile units.”