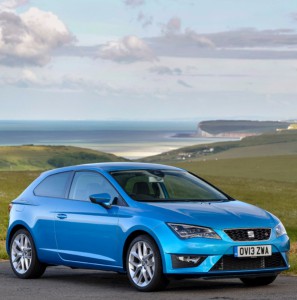 The new three-door Leon SC will boost Seat’s ambitions of becoming the Volkswagen Group’s youthful and sporty division, their Brand Director has claimed.

Neil Williamson believes the new model could claim 25% of all Leon sales – way ahead of the market average for three-door cars.

The Leon SC is expected to resonate with the company’s typical buyers, who have an average age of just 38.

“Our DNA lends itself to a three-door,” said Mr Williamson.

“We’ve not been able to offer one before.

The SC is shorter and lower than the five-door Leon and has different styling aft of the front windscreen pillars, giving it a coupe look.

There are three trim levels – S, SE and the lower and sportier FR – priced from £15,370, which is £300 less than the corresponding five-door.

Most new customers will be captured from rival manufacturers, Mr Williamson added.

Despite struggling in their southern European heartland, Seat are enjoying record sales success in the UK, with 22,750 cars shifted from January to June.

We’ve taken advantage of our opportunities when they have come along,” said Mr Williamson.

“We are very strong in the retail sector where most of the growth is coming from, and the dealers are very focused on that.

“This year our growth is almost double that for the market as a whole.”

The tide of payment protection insurance compensation claims has helped the UK to buck the downward sales trend, he added, but is not the only factor.

“To some people PPI has seemed like free money, although it’s not been a huge driver,” he claimed.

“The main thing is that the economic indicators in the UK – house prices, unemployment levels, GDP and interest rates – are starting to look better.