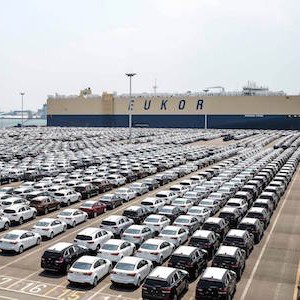 Kia Motors has announced that it expects to reach the 15 millionth cumulative export (from South Korea factories) milestone later this month. This landmark achievement comes 40 years after its very first export shipment of ten units of the Brisa pickup truck to Qatar in 1975.

Put into a different perspective, 15 million Optima saloons, each measuring 4,845 mm in overall length, would circumvent the earth (40,000 km) 1.8 times when lined up bumper to bumper.

Cumulatively through May of this year, the B-segment Rio has been the number one exported model for Kia with 2.23 million vehicles shipped, while the Sportage compact SUV, A-segment Picanto and Sorento midsize SUV follow with 1.57 million, 1.43 million and 1.08 million units respectively.

In terms of the regional breakdown of Kia’s historical exports, 6.03 million vehicles have been shipped to North America, 3.35 million to Europe – with 20 per cent being imported to the UK- 2.52 million to the Middle East & Africa, 1.71 million to Central & South America (including the Caribbean) and 1.29 million to Asia Pacific.

Following the ten million export milestone reached in March of 2011, it has taken Kia only four years and three months to hit 15 million exports, which is one year and nine months less than it took the company to grow its export volume from five million to ten million vehicles. Furthermore, while it took 30 years to surpass the 5 million export mark, Kia will ship its 15 millionth vehicle after only an additional ten years.

Kia vehicles are currently manufactured at a total of four manufacturing plants in South Korea, which have benefited from continuous investment into production facilities and technology. This investment ensures an efficient domestic manufacturing system that places quality at the core of every step in the vehicle assembly process. The company has also expanded annual production capacity in Korea from 800,000 units in 2000 to 1.71 million units in 2014 with over 70 per cent of domestic production exported to overseas markets.