Kia celebrate hitting 500,000 UK sales and best ever May 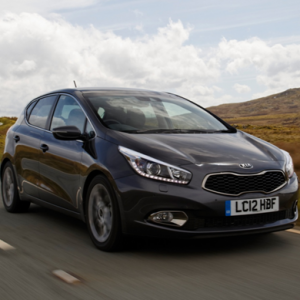 Celebrations are in order at Kia, after the manufacturer passed the 500,000 UK registrations mark and posted record year-to-date and May sales performances.

Kia’s top three best-selling vehicles so far in 2013 are the Sportage, Picanto and Cee’d respectively.

The 500,000th sale – a Cee’d ‘4′ 1.6 CRDi hatchback – was to married couple Dale and Amy Pollard, purchased from the Sandicliffe Leicester dealership.

Paul Philpott, President and CEO of Kia Motors (UK), said: “Reaching 500,000 cars in the UK is another important milestone for the Kia brand.

“Our growth over the last few years has been down to a combination of great new products, changing perceptions of the brand and is testament to the efforts of our growing UK dealer network.

“We predict that we will achieve one million registrations in the UK before the end of the decade and our long-term ambition is to become a ‘Top 5′ volume car brand in the UK.

“Considering that our year-to-date sales equal our entire annual performance from just five years ago I am confident we will get there.”

The handover ceremony for Mr and Mrs Pollard’s new Kia was held on May 28 at the Sandicliffe Leicester dealership.

The couple were given a complimentary Care-3 Service Plan from Sandicliffe, with Kia Motors (UK) presenting the couple champagne, flowers, a £150 Mothercare voucher and a certificate.

Nigel Falkiner, Head of Marketing at Sandicliffe Leicester, said: “We are absolutely delighted that Kia’s 500,000th customer purchased their new car from us here at Sandicliffe.”