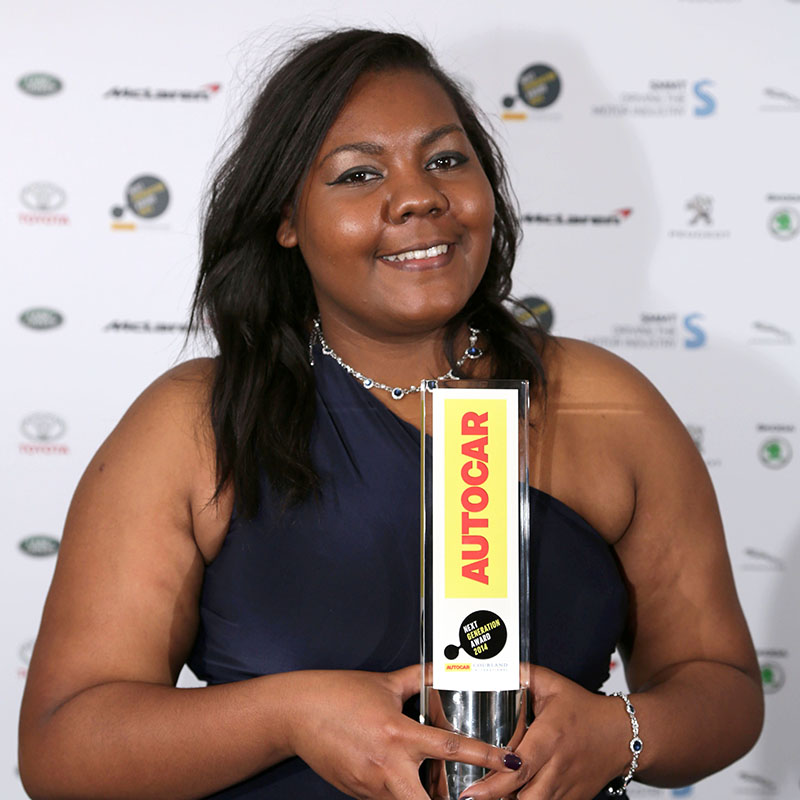 Nicole Agba with her award

Nicole Agba, has been announced winner of the Autocar-Courland Next Generation Award for her innovative biometric steering wheel concept

Conceived as a launch pad into the competitive automotive industry for aspiring innovators, the Autocar-Courland Next Generation Award has helped many graduates kick-start their careers in sectors as diverse as paint and trim, PR and engineering. Roberto Pace, who won the Award in 2012, is now a design engineer at McLaren and designed a key steering rack part on the new P1 hypercar.

Nicole’s ‘Steer Right’ system employs a Smart Fabrics Interactive Textile on the steering wheel of the car, using sensors to monitor the driver’s heart and respiration rates and detecting psychological signals that could indicate fatigue, anger or nervousness. If put into production, the steering wheel would even detect alcohol in the driver’s system, immobilising the vehicle if they are over the limit.

Nicole, 23, from Rainham in Kent, said: “I’m ecstatic to have won! It’s such a unique experience. I’m so pleased to have had the opportunity to be a part of it. Not only am I thrilled to be the first female recipient of the Award, I hope my success inspires others who might ever have been told they cannot do something, to look at my example and not be afraid to chase their dreams. With hard work and dedication, you can achieve anything you set your mind to.”

Announced as winner at the at annual Society of Motor Manufacturers and Traders’ (SMMT) dinner, Nicole will now embark on a five-month work experience tour of Award sponsors Jaguar Land Rover, McLaren Automotive, Peugeot, Skoda and Toyota. She also wins a cash prize of £7,500.

Agba, who graduated from Coventry University with a degree in Transport Design in May, was one of three finalists who made it to the SMMT dinner; the other two were fellow students Freddie Lee and Serge Kaldany, whose entries were an app which alerts drivers to the presence of cyclists in the blind spot and a gaming console-inspired control system.

Autocar editor-in-chief Steve Cropley, also the chairman of the judging panel, said: “Once again we have been bowled over by the calibre of the entries received for this year’s competition, making Nicole an all the more deserved winner.”