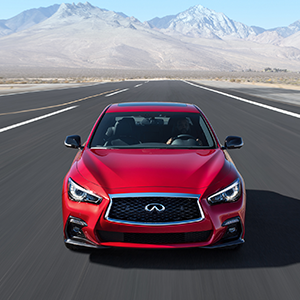 INFINITI has posted its 13th consecutive global sales record. INFINITI sold 19,565 vehicles globally in May, an increase of +9% compared to last May, and sold 104,512 vehicles so far this year, an increase of +37% compared to same period last year. This was the best May sales month for INFINITI in the Americas, UK and in Taiwan.

“It’s gratifying that discerning customers around the world continue to want to drive INFINITI cars and SUVs, especially in the Americas, our largest region, and in China, the region with the most growth potential,” said Roland Krueger, chairman and global president of INFINITI Motor Company.

INFINITI had strong sales across its regions in 2017:

INFINITI UK continued its trend of being the fastest growing automotive brand in May with a 156% increase in registrations (346) and going against the current declining UK market (-0.6% YTD) with +76% increase in 2017 (1749).

INFINITI had the best calendar year-to-date sales in China with 17,206 vehicles sold, an increase of +15% compared to last year.

Sales momentum in Asia and Oceania remains strong, with Taiwan setting an all-time sales record year-to-date with 1,019 vehicles sold, an extraordinary increase of +113%. In Australia, 346 vehicles were sold, a +44% increase and a sales record. A&O also had the best May ever with 517 vehicles sold, reflecting a +8% growth in this region.