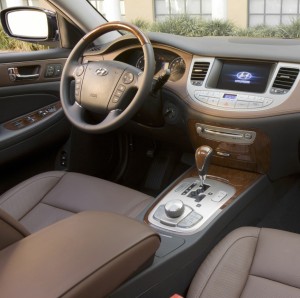 Hyundai will reveal their second-generation Genesis saloon at the Detroit Motor Show in January – and will introduce small numbers in the UK for the first time.

Mark Hall, Vice-President of Marketing at Hyundai, claims European sales will be in the hundreds rather than thousands, but a new right-hand-drive Genesis has been engineered.

However, Mr Hall has confirmed Britain will get only the rear-wheel-drive version and not the H-Trac all-wheel-drive option.

He added that the cost of engineering all-wheel-drive in models with the steering wheel on the right could not be justified with the projected sales volumes.

The engines on offer will make it of only limited interest to Europeans, Hall says, but there is talk of diesels being added later.

“Our number one task is to make the brand image [in Europe] as good as the quality of our cars,” said Mr Hall.

“According to Interbrand, we are now a brand worth $9billion, but in Europe we are still some way behind our competitors.

“Brand awareness has improved by 50% in the last two years but we need to do more, and we want a further 70% increase over the next three years.

“We have a new wave of product launches on the way, new models as well as replacements, and new technologies.