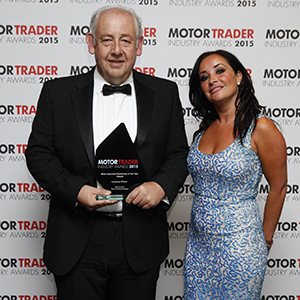 The West Malling-based showroom beat five other finalists to be named Most Improved Dealership of the Year at the Motor Trader Industry Awards 2015, held at the five-star London hotel Grosvenor House.

It makes it a triumphant treble so far this year for the dealership, as the trophy will now sit proudly alongside those it won as Most Improved Company of the Year at February’s AM Awards and New Dealer of the Year at March’s annual conference held by Mitsubishi for its UK dealers.

The family-run business was established in 1947, with Marcus Joy buying it in 2012 and becoming Managing Director. Since then, the London Road showroom has trebled sales of new and used cars, subsequently having to extend its site in 2014 to hold more stock.

A delighted Marcus said: ‘We’re all absolutely thrilled by this. Having already won the AM award I was stunned to get this one. I didn’t think lightning would strike twice, so it’s great that it has.

‘It’s all credit to General Manager Daryl Pimbley and the entire staff here that we’ve won. I just couldn’t have done it without them – they’re the best team that I could hope for, so a huge thank-you to them for all their hard work, which ensured that we won this title to add to our others.’

Humphries & Parks had to show judges that there had been a clear, management-driven change over the two years to December 2014. This had to include ‘a coherent business strategy with measurable success criteria, profit, sales, market share and CSI data.’