Harley-Davidson And Jeep Together Again 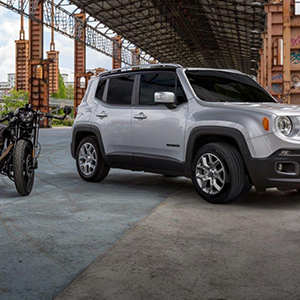 Harley-Davidson and the Jeep brand have renewed and strengthened their European partnership for the fourth consecutive year. The Jeep brand will now be a key partner and official sponsor of major Harley-Davidson events and rallies throughout Europe, the Middle East, and Africa.

Brands don’t come much more iconic than either Harley-Davidson or Jeep and both feature long histories that have played their part on the world stage. And both today produce vehicles that encapsulate the very essence of freedom and the spirit of adventure.

Building on the success of the last three years Jeep will have a larger presence at three major Harley-Davidson European events, kicking off with Euro Festival in Saint-Tropez, France (11-14 May) followed by the European H.O.G Rally in Lugano, Switzerland (29 June -2 July) and culminating in European Bike Week™ in Faaker See, Austria (5-10 September).

Jeep will also attend other Harley-Davidson events in the year including Africa Bike Week™ in South Africa (27-30 April), Thunder in the Glens in Scotland (25-28 August) and the Benelux H.O.G Rally in the Netherlands (2-4 June). In addition, the Jeep brand will showcase vehicles at local events in Ukraine, Hungary, Germany, Italy, Estonia and the Czech Republic.

Event visitors will be given the opportunity to experience up close – and test drive – the entire Jeep lineup, purchase official Jeep Merchandise and enjoy Jeep hospitality at the Jeep Lounge. H.O.G members can also take advantage of a limited offer with preferential rates to purchase new Jeep vehicles.

The newly strengthened relationship builds on the success experienced over the past three years and on the core values the two brands share: freedom, adventure, and a passion for the open road, with all of the experiences it brings. Owners of the two brands share something very special – a sense of belonging that often translates into highly customized vehicles that reflect their owners’ creativity and individuality.