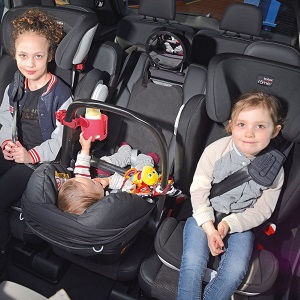 Only half of the cars claiming to accommodate three child car seats at once can actually fit them in, according to new research by What Car?.

One in seven families in the EU (13%) have three or more children and, in the UK, 180,000 families have a third or fourth child every year.

By law, children must use car seats – whether secured by seatbelts or Isofix brackets – until they are 12-years-old or 135cm tall, meaning that the size and type of child car seats used for three children can vary considerably in size and style.

Despite being the fastest-growing family car sector in the UK, only one of the eight SUVs tested by What Car? – the Audi Q7 – was able to fit three child car seats across a single row of seats. Four of the SUVs tested couldn’t fit in three seats at once in any configuration.

The MPV category proved to be the best performer, with four of the six seven-seat cars tested able to accommodate three car seats across the middle row.

A hatchback and an estate with three Isofix points across their second seating row were also tested – neither were able to fit in three car seats side-by-side.

What Car? tested 16 of the best-selling cars in the UK and used the same three children – aged seven, four and 11 months – in every car; the youngest was in a Maxi-Cosi Pebble infant seat secured by the seat belt, while the older two were in Britax Romer Kidfix II seats with Isofix points.

What Car? consumer editor Claire Evans, who conducted the research, said: “If you have a larger family, picking a car with seven seats might seem like a good solution, but it doesn’t guarantee a second row of seats wide enough to accommodate three child seats. And the rearmost row of seats in a seven-seater might not be a safe or practical place to position a child.

“Size doesn’t always equal practicality – even some of the biggest SUVs can only accommodate two child seats.

“Our research only shows one possible scenario in terms of the combination of child ages and car seat styles, but it highlights the need for parents to check that their child seats will fit properly into a car before buying it.”