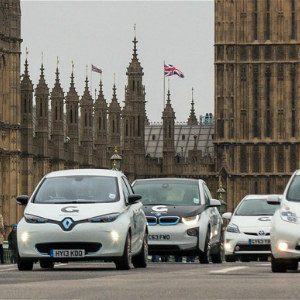 Plans to make nearly every vehicle in the country zero-emission by 2050 have taken a further step forward, with the launch of a £2 million government fund to encourage more businesses to switch to hydrogen-fuelled vehicles which could see public and private sector fleets get up to 75% off the cost of zero-emission fuel cell electric vehicles.

The £2 million fund, launched by the government’s Office for Low Emission Vehicles (OLEV), could bring up to 100 more hydrogen fuel cell cars and vans onto our roads by next spring – the equivalent of tripling the number of vehicles currently in use.

The new fund comes after the government committed £5 million in 2014 through the Hydrogen for Transport Advancement Programme for 12 hydrogen refuelling stations. Today, Transport Minister Andrew Jones opened the second of these stations at the National Physical Laboratory in Teddington. All 12 stations are expected to be open by the end of the year, which is a significant step towards a national network.

“We are always looking at new ways to make the vehicles of the future cleaner, and hydrogen fuel cells are an important part of our vision for almost all cars and vans to be zero-emission by 2050.

This funding, along with the growing network of hydrogen refuelling stations opening in England, will help businesses and the public sector to get on board with this exciting technology. This is further proof that we are leading the way in making journeys cleaner and protecting the environment.”

The money will cover up to 75% of the costs of new vehicles bought by next April (2017), as well as the cost of running them for up to 3 years. Support will also be available for the leasing or renting of vehicles, insurance, hydrogen fuel and servicing.

FCEVs emit no CO2 or other harmful pollutants, and the only by-product is pure water vapour. They also offer a driving range of more than 300 miles, and can be refuelled in 5 minutes using a hydrogen gas pump similar to petrol pumps.

The market and technology for hydrogen FCEVs is new but slowly gathering pace. Vehicle manufacturers have so far introduced a small number of models, with global production currently limited to just a few thousand units.

The UK is one of only 5 launch markets for these vehicles: Toyota and Hyundai each have a single FCEV model for sale in the UK – the Mirai and the iX35 Fuel Cell respectively – with more to come.

Bids for the FCEV Fleet Support Scheme must be submitted by Monday 4 July 2016. Successful bidders will be informed later this year.

For more information on the benefits of electric vehicles, visitwww.goultralow.com