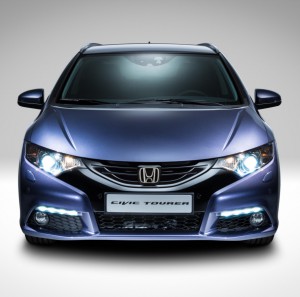 Honda are aiming to break the fleet market with their new British-built Civic Tourer, it has been revealed.

The vehicle will be available with two engines: the new 1.6 i-DTEC from the Earth Dreams Technology series, and the 1.8 i-VTEC manual or automatic.

It also will offer a brand new Adaptive Damper System (ADS), which aims to help enhance stability and comfort under varying load and driving conditions.

“To achieve true utility on a compact car, you have to consider how to make the most of the space in the cabin, which generally also affects the design.

“Due to the clever platform of the Civic, we had freedom to optimise the package.

“The end result is a car that has almost a sports-car silhouette.

“For me, the strength of the car is the synergy of functionality, versatility, and dynamic expression.

“At first glance it is clear that the Civic Tourer does not look like other Wagons.

“Recently-launched cars have tended to follow a similar style.

“The Civic Tourer has a different balance and appeal.”

Lee Wheeler, Head of Corporate Operations at Honda UK, added: “Around 70% of the fleet market for estates are diesels and the C-segment is dominated by the Ford Focus and Vauxhall Astra so we will be pitching the Tourer more against the likes of the Volkswagen Golf and Skoda Octavia.

“We will also be targeting D segment estates because we can beat them on cargo space as well.”

The Honda Civic Tourer will be launched in early 2014.