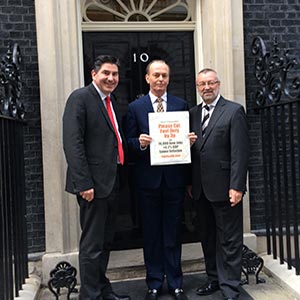 A petition calling for a three pence-per-litre reduction in fuel duty has been delivered to Downing Street.

The FairFuelUK (FFUK) Campaign, which is backed by numerous key industry players, is urging Chancellor George Osborne to make the cut a priority in his forthcoming Budget.

It was delivered by bodies including the Freight Transport Association (FTA) and Road Haulage Association (RHA), as well as Rob Flello MP and motoring journalist Quentin Wilson.

The letter is addressed to Prime Minister David Cameron and signed by all FFUK representatives.

“The cut in fuel duty would make an enormous difference to the ‘pockets’ of freight operators.”

FTA figures estimate each penny of fuel duty costs freight and logistics operators £116million every year, with the proposed 3ppl cut predicted to save the industry around £350million annually.

In their pre-Budget submission to Mr Osborne, the FTA claimed a reduction would ease the cost pressure on domestic freight activity and stimulate economic growth.

The FTA also claimed the increase in disposable income for consumers and freed-up cash for businesses would be spent or invested elsewhere in the economy. 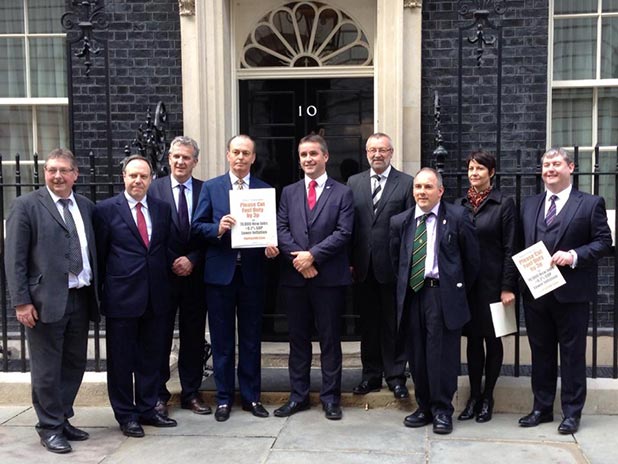 Karen Dee, Director of Policy at the FTA, said: “FTA believes that the Chancellor could give the economy a real boost by reducing fuel duty by 3ppl in the Budget on March 19, as well as easing the pressure on struggling businesses.

“Research has shown that the cut in fuel duty would make an enormous difference to the ‘pockets’ of freight operators, and that the Chancellor would get his money back through higher tax receipts from increased employment and improving trade.”

Launched in 2011 the FairFuelUK Campaign has been credited with stopping all fuel duty increases that were planned in this parliament.

Figures suggest it has helped save the freight industry more than £4billion.

Geoff Dunning, Chief Executive of the RHA, added: “The Road Haulage Association acknowledges the fact that the UK rate of fuel duty, currently standing at 57.95ppl has been held down by the coalition and also welcomes the decision that there should be no increase in fuel duty in this parliament.

“Members of the RHA have noted that the absence of increases has been positive for the haulage industry and for the economy.

“However, UK fuel duty is still by far the highest in the EU, impacting on UK firms’ competitiveness and cash flow and holding back the ability of hauliers to invest in equipment, vehicles and people.

“Surely the time has now come to finally end all speculation and come up with solution that will benefit Britain’s vital haulage industry while not putting the Treasury at a financial disadvantage?

“For many hauliers, another duty freeze will be seen as little more than a delaying tactic.

“UK hauliers have to watch every penny; they can’t afford not to.

“This is an industry where any increase in the price of fuel or the rate of fuel duty has to be passed on to the customer – ultimately increasing prices for business and consumers alike.

“And if customers won’t pay, there is a real threat to the survival of the business.

“Regardless of their area of expertise, they are all voters.

“A 3ppl cut in fuel duty would go a long way to ensuring a successful future – not just for the industry in which they work, but for the UK road transport industry and the economy as a whole.”