Frater turns to City West Commercials for a Mercedes-Benz Arocs

New-start business Frater Urban Quarry specialises in processing and supplying raw material from demolition sites – so it’s fitting that the livery worn by its new Mercedes-Benz tipper could best be described as an ‘explosion of colour’. 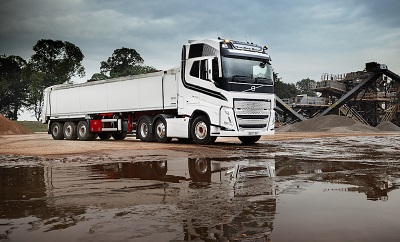 The Arocs eight-wheeler was supplied to the Bristol-based operator by City West Commercials, the dedicated Mercedes-Benz Trucks Dealer for the south west. It has a ClassicSpace M-cab, complete with ground-breaking MirrorCam technology instead of conventional mirrors, and a stylish and intuitive twin-screen Multimedia Cockpit dashboard.

Frater Urban Quarry was launched to provide premium aggregate products not only to the construction industry but also to the homeowner needing a ‘dumpy bag’ for a DIY project.  Although comparable in quality to quarried materials, these aggregates are produced from recycled demolition waste and therefore significantly more cost-effective.

As a 3240 variant, its new Arocs employs a 10.7-litre in-line six-cylinder engine producing 290 kW (394 hp). The truck collects waste from sites within a 30-mile radius of Bristol, and transports it to Frater’s headquarters in Vale Lane, Bedminster, for processing in its crushing and screening plant. It also delivers bulk loads of ready-to-use aggregates to customers in and around the city.

Acquired with competitive funding support from Mercedes-Benz Finance, the Arocs is the first truck to wear Frater Urban Quarry’s unmissable, full wrap livery, which is by Freestyle Designs, of Bath.  It is also the first Mercedes-Benz to be operated by any part of the Wring Group of companies, which, in addition to demolition, dismantling, decontamination and remediation works, and scaffolding, provides asbestos removal, waste management, and haulage and plant hire services.

The truck was pre-built for the manufacturer’s WorkReady programme, with a steel tipping body and PM axle weighing system by Boweld Truck Bodies, of Pentre Halkyn, Flintshire. It was therefore available from stock and delivered at short notice by City West Commercials, but not before the Dealer had added a set of Brigade safety cameras. So pleased is the operator with its first Mercedes-Benz that it has just returned with orders for another five.

“We’re convinced there’s a big opportunity to grow the Frater Urban Quarry business,” enthused Plant & Logistics Manager Simon Holdom. “The home improvement sector is booming and while others are already providing a similar service, they are let down by their poor product quality. We, by contrast, are able to offer a superior standard of recycled aggregate.”

Commenting on the decision to purchase the Arocs, he recalled: “We’d trialled a couple of City West Commercials’ demonstrators previously. They had done well, but we were never in a position to ‘press the button’ and order one.

“However, the launch of our new venture coincided with some aftersales issues we were having with our established chassis supplier, while the Arocs was competitively priced, built, prep’d and ready to go. Essentially, it was the right truck at the right time.”

Mr Holdom continued: “These are still early days but we’re certainly impressed with the Mercedes-Benz. It looks strong and durable, and is loaded with new technology, so won’t be going out of date for a long time. In short, it ticks all the boxes.”

The truck is the subject of a Mercedes-Benz Complete Service Contract and is now being inspected and maintained at City West Commercials’ Avonmouth headquarters. “As a long-established family business, we like to build lasting relationships with our suppliers,” added Simon Holdom.

“Truck Sales Executive Simon Johnson-Taylor has been very helpful in providing us with demonstrators and managing our orders, while we’re also very pleased with what we’ve seen so far of City West Commercials’ back-up.

“We have our own workshop, but that’s only open during the day. The Dealer’s Service Department works on the Arocs during the night, and provides our driver with a courtesy vehicle in which to get home and return the next morning, so we don’t suffer any downtime.”