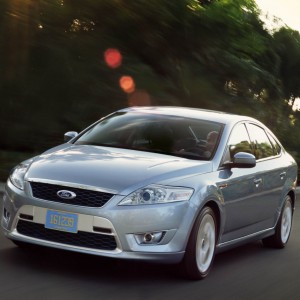 Ford are marking 20years of the Mondeo with two additional trim lines and lower running costs – but not the planned all-new model.

Production of the Mondeo will switch from Genk in Belgium to Valencia in Spain next year, with the new model launch delayed until after the move.

Genk is to shut as part of Ford of Europe’s turnaround plans, with Valencia becoming the hub for the new Mondeo, S-Max and Galaxy models in 2015.

It is £1,500 cheaper than the outgoing Titanium X.

Buyers who opt for either of the two 2.0litre diesel engines will also save on running costs.

Engine and aerodynamic changes have reduced CO2 emissions by up to 10g/km, which will lower BIK tax rates and slash £75 off the annual VED licence.

Fuel consumption also improves – by almost 4mpg in some versions.

Meanwhile, the Graphite trim is aimed at retail buyers and is available as a saloon and estate with a choice of four engines from £15,995.

Ford have sold almost 1.4million Mondeos in Britain alone, peaking at more than 127,000 in its first full year.