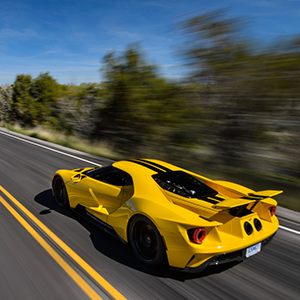 The road-going version of the Ford GT will make its first dynamic appearance in the UK later this month, in the hands of Ford Chip Ganassi Racing drivers Andy Priaulx and Harry Tincknell, at the 2017 Goodwood Festival of Speed.

Priaulx and Tincknell will be joined on the Hill by their team mate, Billy Johnson, swapping his usual seat in the Ford GT race car for the fearsome Ford Mustang GT4, a track-ready race car unveiled at the 2016 SEMA Show in Las Vegas, to tackle the challenging 1.16-mile Hillclimb course.

In addition to the track action, visitors to the Ford stand at Goodwood will discover models including the all-new Ford Fiesta making its UK debut. Also on show will be the Ford ST-Line range of Ford Performance-inspired models, including the Fiesta ST-Line, Focus ST-Line, Kuga ST-Line, Mondeo ST-Line, Edge ST-Line and a new S-MAX ST-Line on show for the first time.

Activities at Goodwood House, West Sussex, begin on Thursday, June 29 with the Moving Motor Show, followed by the Festival of Speed from Friday, June 30, to Sunday, July 2.