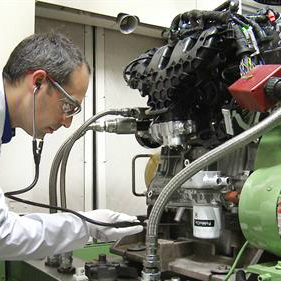 From wine tasting to tuning concert pianos, sometimes there is no substitute for the human senses when it comes to ensuring products meet the most stringent quality tests. Now you can add engine production to that list.

In a world where product testing is increasingly carried out using high-tech devices, Ford has found that for certain tests, nothing beats a good set of ears to help ensure the all-new Focus RS hot hatch achieves optimum performance.

Highly trained production workers conduct an auditory test that confirms the perfect running of the 350PS 2.3-litre EcoBoost engine, in advance of it being fitted to the completed Ford Focus RS cars.

“This team knows what a perfectly calibrated engine sounds like and they know the tiny sounds to listen for in case there is a problem,” said Gunnar Herrmann, vice president, Quality, Ford of Europe. “Think of it like a doctor who has the most advanced diagnostic technology but still uses a stethoscope to gather vital clues to a patient’s health.”

Employees at Ford’s manufacturing facility in Valencia, Spain, are taught to identify defects using specially prepared “faulty” engines that highlight the sound that they need to listen for. After several months of training and coaching, team members are qualified to conduct the intensive one‑minute tests in one of 18 sound-proofed cells at the end of the production line.

Should the engineers hear any rattling or whistling sounds typically associated with issues, such as a blocked lubrication passage or a damaged gear tooth, the engine is removed so that further checks can be carried out, and the problem addressed. In this way the quality of the manufacturing process also can be continuously improved.

The 350PS version of Ford’s 2.3-litre EcoBoost engine fitted to the all-new Focus RS has been specially engineered to ensure Ford’s ultimate hot hatch can cover 0-62mph in 4.7 seconds and achieve a top speed of 165mph.

Further vehicles that benefit from the scrutiny of the engine listeners in Valencia include the Ford Focus ST, S-MAX and Mondeo.

“The experience of hearing thousands of engines allows us to sense straight away when something is not working perfectly,” said Juan Carlos Rosmari, quality technician, Valencia Engine Plant. “Each different engine type has its own unique sound, and from listening to them in the test cells we get to know their individual characters – and the tell-tale signs which indicate a problem.”

Between them, Ford’s team of engine listeners carries out the test on 2,000 engines per day at the Valencia plant. Preparing engines for testing provides a natural break between the listening sessions, so that the employees can maintain full concentration on the tests over a working day.

The personal touch also can be found in other Ford quality processes such as the master crafts people who scrutinise the fine detailing and stitching of the leather trim fitted to a Ford Vignale model, or the highly skilled artisans who sculpt by hand the complex 3D shapes of new vehicles in Ford’s clay modelling studios.

“The skills of Ford employees, supported by the latest technology, help us deliver high-quality vehicles which perform better, look better, and provide outstanding durability throughout their life,” Herrmann added.