Food For Thought; Japan Wants Old Drivers To Use Their Noodle 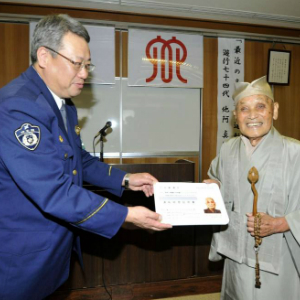 Police in Japan have begun a strange new process of swapping discounts on noodles for licences. Police realised that the number of road traffic accidents involving the elderly was on the rise, a trend that reflects the ageing population, and in a bid to reduce the number of collisions, fatal and minor, they came up with the food for license exchange.

According to Fuji News Network, the overall number of traffic accidents in Tokyo have been on the decline since 2005. However, accidents involving elderly drivers have been steadily increasing over the same period.

It has been reported that from Friday, elderly drivers who hand over their licences will get a 15% discount on ramen at the Sugakiya restaurant chain.

The Campaign has received mixed reaction from some claiming that it is taking away the rights and freedom of the elderly who ought to be respected, to others who publicly support the campaign like high-ranking Buddhist priest, Taa Shinen(Pictured). There are around 17 million licensed drivers aged 65 or over in Japan. Last year, about 270,000 of them voluntarily gave up their licenses.

Taa Shinen said that he acknowledges the risk of older drivers and hopes that his choice to surrender his licence will encourage others to do the same. He said: “It’s stupid to try to maintain your licences just out of pride” and added “I hope you will surrender your driver’s licenses and live to the end of your natural lives.”