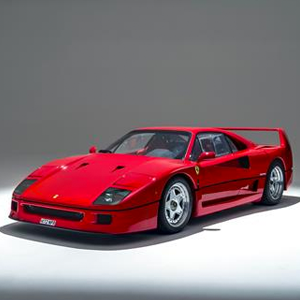 Rarely does an authentic, Classiche certified, Ferrari F40 come to market, but an amazing example of the iconic eighties supercar will cross the auction block with Silverstone Auctions at the prestigious Salon Privé Sale on 2nd September.

On the 30th anniversary of the F40 and the 70th anniversary of Ferrari, the hugely desirable non-catalytic converter, non-adjustable suspension, sliding plexiglass windows Ferrari F40 will be offered with an estimate of £875,000 – £975,000.

The Ferrari will star in a line-up of seventy of the world’s finest classic and sports cars scheduled to cross the auction block at Salon Privé, a glamorous Concours D’Elegance and garden party set against the backdrop of Blenheim Palace. It will be a fitting occasion for the sale of the F40 as the Salon Privé Concours Masters competition will feature a tribute to 70 years of Ferrari on the day.

The first supercar to break the 200mph barrier as Ferrari fought for dominance in the performance car market in the eighties, the stripped down 478 bhp Rosso Corsa Ferrari F40 first appeared in 1987 and immediately set the world alight. The car is equipped with a DOHC V8 engine with twin turbo chargers and is capable of a 0-60 time of just 3.8 seconds.

The most authentic, pure race bred versions, with none of the ‘extras’ of catalytic converters, adjustable suspension or winding windows, are the most desirable among enthusiasts, and this example also underwent a detailed 300,000 euro restoration by Carrozzeria Zanasi in 2016, after which Classiche certification was granted by the Ferrari factory.

“All F40s are desirable and normally well presented, but very rarely a car such as this comes to market with the kind of fastidious attention to detail that will impress the most hardened enthusiast,” says Harry Whale, operations manager at Silverstone Auctions. “It’s a remarkable car, and it’s certain to turn heads.”

The F40 has been lightly used, covering less than a verified 3,000 km before the restoration and just 592 km since. It was recently serviced in advance of the sale by Carrozzeria Zanasi.