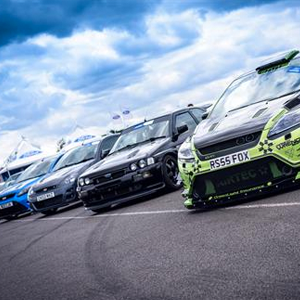 Over 21,000 Ford fans flocked to the home of British motorsport for the UK’s biggest Ford-only event, which saw yet another year of incredible growth.

Other star features included one of the very first public appearances of the new Fiesta, exhibited by Ford itself, while Ford’s UK MD, Andy Barratt was on hand to answer questions from the public.

Other star features included the GT40, GT 2005 and 2017 GT, in which lucky winners were able to enjoy a lap around Silverstone circuit, plus the 2017 GT going full pace round the circuit with Le Mans driver Harry Tinknell at the wheel, along with the the Live Action Arena, featuring a live performance from stunt driver Paul Swift, a J-Turn masterclass, bookable track time for show visitors and a dedicated Classic Zone, hosted by Classic Ford magazine in partnership with Burton Power.

Headline sponsorship for the event came from Ford specialists, mountune, while Hardrace, KSport, BC Racing, BC Forged Wheels, Sky Insurance, Meguiar’s and Goodridge were the other key sponsors.

This year’s Show & Shine winners, sponsored by ValetPRO, were Danny Crane and his Ford Focus MK2 RS in first place, Jo Fowler and her Ford Focus ST in second and Michael Fern and his Ford Escort MK6 in third. The best club stand went to Simply Mustang, while the Sprint Test winners on the day were Josh Nash, Jonathan Trezins and Andy Murray.

Ford Fair will return in 2018, but fans of the Blue Oval still have one more chance to celebrate their brand in style, with Ford Fest set to take place at the famous Santa Pod drag strip in Podington, Beds, on September 17th.