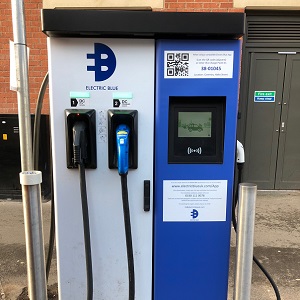 Electric Blue has set up a trial for the city’s taxi drivers to rent an electric taxi whilst they consider the benefits of converting to an EV permanently. Alex Calnan, Electric Blue’s Managing Director, says the ‘try before you buy’ is an exciting concept:  “For many people, driving an EV is too much of an unknown,” he explains, “and in the taxi space drivers just haven’t been in an EV and so they don’t know the benefits.

“Following other successful trials in Watford and St Albans, we’re offering Coventry taxi drivers an opportunity to step out of their petrol or diesel vehicle and try a fully-licenced EV taxi from Electric Blue for a couple of weeks to see if we can convert them into a new way of thinking.”

For drivers taking part in Electric Blue’s Coventry scheme, training is provided beforehand so that they know how to operate the zero emissions Dynamo Taxi and the EV charge points, and Electric Blue remains on hand to support the taxi driver throughout the trial.

“We want the drivers to trial an EV taxi with confidence so that we can persuade them that converting to electric is a sensible and financially sound option,” explains Alex. “An essential part of giving these drivers confidence is also giving them access to reliable charging technology, which is why we are partnering with eVolt.“

Electric Blue chose to work with eVolt following the success of an earlier taxi trial in St Albans last year.

“We know that the reliability of the charging infrastructure is imperative for any EV driver,” Alex continues, “but even more so when we are trying to persuade taxi drivers to convert. Their income is dependent on time on the road so they want to know that an EV charger is always going to be operational. eVolt has a fantastic track record and we have never experienced a technology failure with any eVolt charger.”

In setting up the trial, which starts in July, Electric Blue has been working with the local council to determine the best locations for the charge points. The chosen location is Hale Street, which is one of the main taxi ranks, close to the Transport museum, the bus station, as well as student accommodation.

An eVolt rapid 50kW Raption charger has been installed, featuring triple AC/DC outlets and locking plug holsters. It is suitable for charging all rapid-charge-enabled EVs. The modular power construction of the Raption charger provides excellent uptime and in the unlikely event that one rectifier should fail, the modular design means that others remain operational so the taxi drivers always have access to a charge.