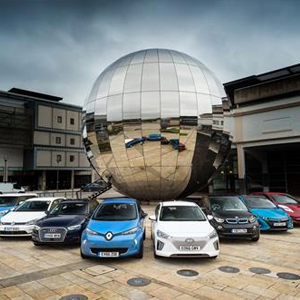 New electric vehicle registration data shows that public appetite for plug-in vehicles continued to accelerate in the third quarter of 2017.

A total of 12,932 plug-in models were registered between July and September, a rise of 36% on the same period in 2016 and 721 units higher than the previous record quarter, January-March 2017.

The best-ever quarterly figures follow a record September, with 7,794 plug-in models registered (27% up on September 2016). This was driven by the rapidly expanding variety of plug-in vehicles offered by manufacturers, their low running costs, and the continually-improving national charging infrastructure. With demand continuing to increase, this year’s registrations are expected to exceed the full-year total for 2016 by the end of October.

The popularity of pure electric cars continues to drive growth, with 11,127 new vehicles sold in the year so far, up 37% on 2016. Meanwhile, registrations of plug-in hybrids also showed strength, up 15% for the year-to-date, boosted by 5,764 new vehicles finding homes in September (a 38% rise). The record uptake levels pushes the national total of plug-in cars on UK roads to more than 120,000, meaning EV sales now make up for 1.7% of new car registrations.

Poppy Welch, Head of Go Ultra Low, said: “It is great to see that the popularity of plug-in cars continues to grow at a record pace. To help even more UK motorists save money and cut their emissions, Go Ultra Low is launching a new media campaign that will help UK motorists find out what type of electric vehicle could be right for them. A host of real-world plug-in vehicle owner case studies and eight informative videoswill demonstrate how plug-in vehicles could fit into motorists’ lives, even to those completely new to plug-in cars.”

Transport Minister, Jesse Norman said: “We are committed to investing £1bn in ultra-low emission vehicles, including £100 million in the UK’s charging infrastructure by 2021. It is great to see more than 120,000 people have already made the switch. The launch of the new Go Ultra Low website demonstrates how ultra low emission vehicles can fit into even more people’s lives. It is our ambition that every new car and van is zero emission by 2040 and decarbonising our transport is a key part of the government’s Clean Growth Strategy.”

The new Go Ultra Low media campaign launches this week with a new website, advertising, and social media campaign that aims to make it even easier for UK motorists to understand the benefits of electric vehicles.

Go Ultra Low has also launched a range of specially-developed interactive tools. These will provide motorists with tailored information on a number of topics including how much they could save with an electric car, how easy it is to charge at home and how far a plug-in car can go on a single charge.

A collaborative campaign and the first of its kind, Go Ultra Low brings together a consortium of vehicle manufacturers, Government and the Society of Motor Manufacturers and Traders (SMMT).