Don’t use the hard shoulder as a naughty step

It’s a familiar scene for most parents driving on a motorway – children misbehaving. But the answer is not to do as one set of parents did and use the hard shoulder as a naughty step. 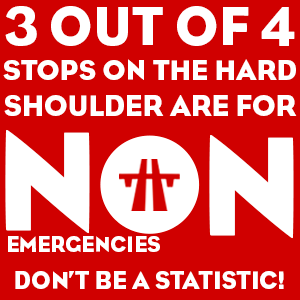 The shocking action on the side of the M4 near Bristol was revealed by Highways England today as the company released a list of excuses given to its traffic officers by drivers who had wrongly stopped on motorways.

Other excuses included a family cooking a meal and someone getting out of a taxi to spend a penny.

But CCTV footage reminds drivers why stopping on the hard shoulder also presents a risk. As many people set out on journeys this bank holiday and half term holidays the answer is to be prepared.

“We want everyone to get to their destinations safely. But some people put themselves at risk. The advice is simple: Be prepared. Check your vehicle before you set out to avoid unnecessary breakdowns; don’t stop except in an emergency; and if you have to stop, make sure you know what to do.

Drivers can get advice about how to check their vehicles before setting out:
http://think.direct.gov.uk/assets/pdf/HighwaysEnglandVehicleSafetyChecks2017.pdf

If hot weather if forecast drivers are advised to carry plenty of water to drink.

What to do in an emergency

Always try to exit the motorway immediately if your vehicle is damaged or experiences difficulties. If that’s not possible, move into the nearest place of relative safety.

On most motorways this will be the hard shoulder. But on a smart motorway there may not always be a hard shoulder, or the hard shoulder may be open to traffic. In these cases you’ll see emergency areas spaced regularly along the motorway. Make your way to the nearest one.

If you stop in the nearside lane next to a hard shoulder or verge and feel you are able to exit safely with any occupants, consider exiting your vehicle via the nearside (left hand) door, and wait behind the safety barrier, if there is one and safe to do so.

If it is not possible to get out of your vehicle safely, or there is no other place of relative safety to wait then you should stay in your vehicle with your seat belt on and dial ‘999’ if you have access to a working mobile phone.

For advice on how to drive on motorways, including during an emergency, visit:
https://www.gov.uk/guidance/how-to-drive-on-a-smart-motorway

Excuses given to Highways England traffic officers by drivers who have wrongly stopped include: